Ajaz Khan allegedly sent the photos to a woman he met on Facebook. 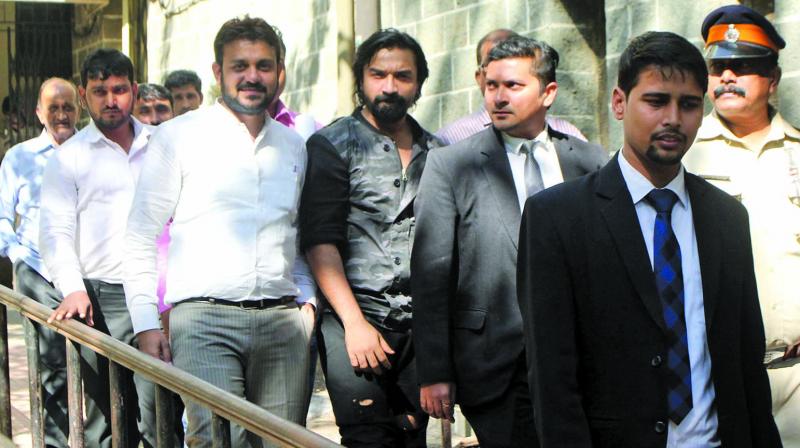 Mumbai: Actor and model Ajaz Khan was arrested by the Malwani police on Saturday midnight for sending obscene pictures to a woman on WhatsApp.

The actor, who is a former Bigg Boss contestant, was produced in the Borivali court on Sunday and was released on a bail bond of Rs 10,000.

According to the complainant, who is a 35-year-old divorced woman, she received a friend request from Khan on Facebook in the first week of October. She accepted his request following which they started chatting and exchanged mobile numbers.

The complainant had informed Khan that she needed a financer for her work. So Khan had called her to his Filmistan studio in Goregaon on October 30 to discuss her finances.  The complainant visited Khan in Goregaon but claimed, “He was busy shooting and no discussion took place.”

On November 15 when the complainant was chatting with Khan he allegedly sent her a nude picture of himself. Following this, the woman visited the police station and lodged a complaint against Khan. Acting upon the complaint on Saturday night, the complainant called Khan to confirm if he was at his residence in Andheri and after confirming it, the police officers went there and arrested him.

The Malwani police arrested Khan under section 354 (A) and section 66E of IT act. Senior police inspector of Malwani Deepak Phatangare confirmed the incident and said, “On the complaint of a local resident, we registered a case against Khan and arrested him. We produced him in court on Sunday.”

Actor Khan however, denied the claims and told the media, after the court hearing, “I have done nothing wrong and so I was released by the court.”

Earlier in the Borivali court, he said, “I am a celebrity and a few people try to misuse my celebrity status.”

According to Khan he still had the chat history and he had not sent anything obscene to the complainant. “Allegations against me are false,” he alleged.

Yusuf Khan, Khan’s lawyer, said, “We should wait for the outcome of the case. Earlier too Khan was targeted for publicity, and this time too he is the victim.”

The 35-year-old complainant on the other hand said, “After he sent me the obscene picture I asked him what is this, and he said if I felt bad then he was sorry.” She also claimed that she had call recordings to prove that Khan had tried to talk about sex with her.

Earlier in June this year, a model had lodged a police complaint in the Versova police station against Khan. The model had claimed that Khan tried to have a sexually intimate conversation on WhatsApp with her.