The railway and road traffic was also affected to a large extent. 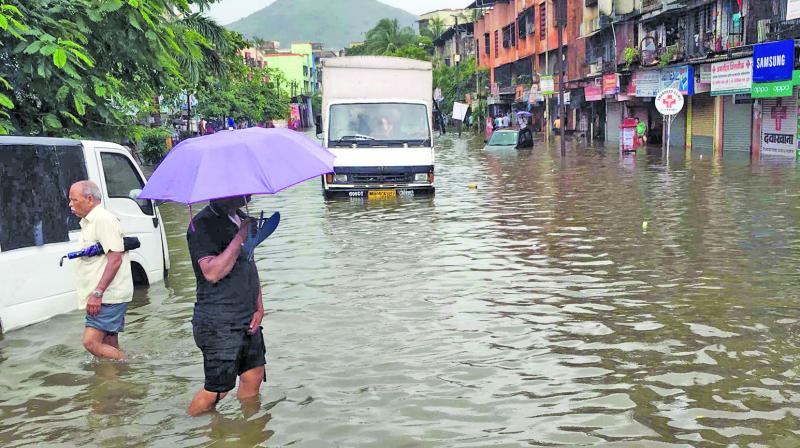 A waterlogged street at Nalasopara in the western suburb after the downpur.

Mumbai: It was a wet Wednesday for Mumbaikars as the city witnessed its highest rainfall in September in the last 10 years, as incessant rains continued to lash the city for the second consecutive day. Air services were hit the most as flight operations were heavily disrupted. The runway at the Mumbai international airport remained shut due the heavy rains, flooding and poor visibility, while flights took off from the secondary runway. The railway and road traffic was also affected to a large extent.

According to India Meteorological Department (IMD), its Santacruz observatory recorded 303mm of rainfall for a period of 24 hours from 8.30 am-8.30 am on September 19-20. It is the highest recorded rainfall in a single day in the month of September in the last 10 years. It is also roughly equivalent to the average September rainfall (312.3mm) for the entire month. The Colaba observatory recorded 210mm in the same time period.

The IMD has forecast that intermittent rain or showers are likely to occur in the city and suburbs on Thursday with heavy to very heavy rains at one or two places.

According to the Brihanmumbai Municipal Corporation's (BMC) automatic weather stations, the city recorded 204 mm of rainfall during the 10-hour period from 8 am to 6 pm.

Despite the rains, normal public life was largely unaffected on Wednesday as the majority of people preferred to stay indoors, probably mindful of the hardships they faced during the August 29 downpour. No deaths or mishaps were reported during the day.

Schools and colleges in Mumbai metropolitan region were already ordered closed in view of heavy rains. In addition to this, private offices and institutions too remained closed. Attendance in government offices was also very low. Due to this, local trains and buses remained largely empty, giving a deserted look to the city.

Railway services were also affected, with trains running late throughout the day. Vehicular traffic moved at a slower pace on major roads in the city, including on the Eastern and Western Express Highway.

Incidents of tree and branches falling were reported in 95 places, a majority of them in western suburbs (75). Besides, there were nine short-circuits and two cases of wall collapse across the city.