The goat is white, having light and dark brown shades on its head, neck and backside. 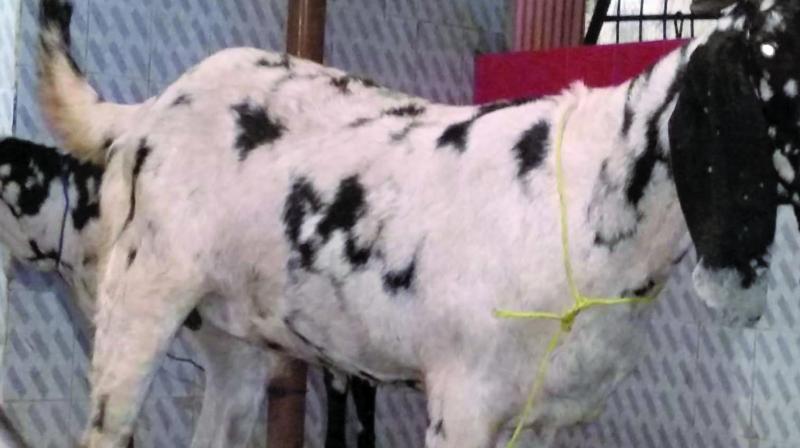 The goat is proving to be a major attraction at Deonar.

Mumbai: This Bakri Eid, a goat worth whopping Rs 70 lakh, is proving to be a major attraction at Deonar abattoir. The astronomical cost attributed to it is due to the words ‘Allah,’ ‘Mohammed’ and also the numbers ‘786’ inscribed on its body.

Every year for Bakri Eid, thousands of goats, sheeps and horned animals are brought for sale to the Deonar abattoir from various parts of Maharashtra and the country. Among them, the goat belonging to Mohammad Ayaz Khan from Amethi is catching all eyes.

The goat is white, having light and dark brown shades on its head, neck and backside. The owner claims that shades on the neck indicate the inscription of words Allah and Mohammed. Number 786  is also inscribes on its neck, he said.

“I have quoted a price of Rs 70,70,786 for this goat, who is sacred as there are words of Allah and Mohammed on its body. The 786 number on its neck also makes it special. I hope that there are many people in Mumbai, who would like to buy it,” said Mr Khan. “Let the buyer first approach me, I will discuss the price with him,” he said.

However, people are saying the goat is expensive.  “Its true that the goat bears the words Allah and Mohammed and also the number 786. But Rs 70 lakh is too costly,” said a visitors. The number 786 assumes great significance for Muslims as it is believed to depict the total numerological value of the Quranic expression ‘Bismillah al-Rahman al-Rahim.’

According to experts, the astronomical rate quoted is a trick to attract buyers. Some very rich people buy them at the cost of a lakh or two, they said.