Stir to continue as AIMTC’s meet with min inconclusive

The AIMTC claimed that its strike caused a loss of around Rs 4,000 crore across the country, while Maharashtra lost around rs 640 crore. 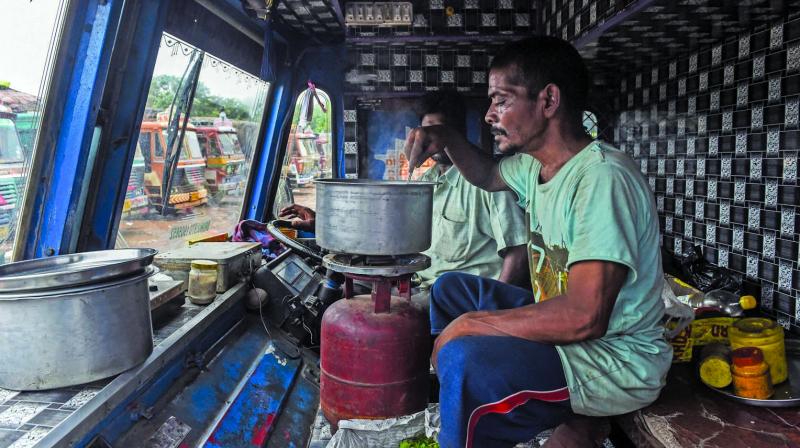 A truck driver cooks food inside his truck parked at Cotton Green Terminal following a strike called by the All Indian Motor Transport Congress, in Mumbai on Friday. (Photo: PTI)

MUMBAI: The All India Motor Transport Congress (AIMTC), which went on an indefinite nationwide ‘chakka jam’ (strike) from Friday morning to protest against the hike in diesel prices, claimed to have received a 100 per cent response. But transport commissioner Shekhar Channe said that it did not have any impact on the transport of essential services.

Meanwhile, the transporters have decided to continue the strike as the AIMTC’s meetings with Union minister Nitin Gadkari on Thursday and Union minister Piyush Goyal on Friday to resolve the issue, proved inconclusive.

The AIMTC claimed that its strike caused a loss of around Rs 4,000 crore across the country, while Maharashtra lost around rs 640 crore.  It also said, “ “All major loading points and ports in country are inactive due to the stir. Transporters will continue with indefinite nationwide stir till their demands are addressed by the central government.”

The Bombay Goods Transport Association, ex-president Ashok Goyal said, “The strike is voluntary and we are not forcing anyone to join the protest against the government over the diesel prices hike.”

Meanwhile, Mr Channe said, “The essential services in the state were not impacted by the strike. Close to 2,000 trucks of vegetables and fruits have arrived in the APMC, while 50 to 60 per cent school buses were off the road leading to inconvenience to the students.”