The activist has complained to the BMC on the matter. 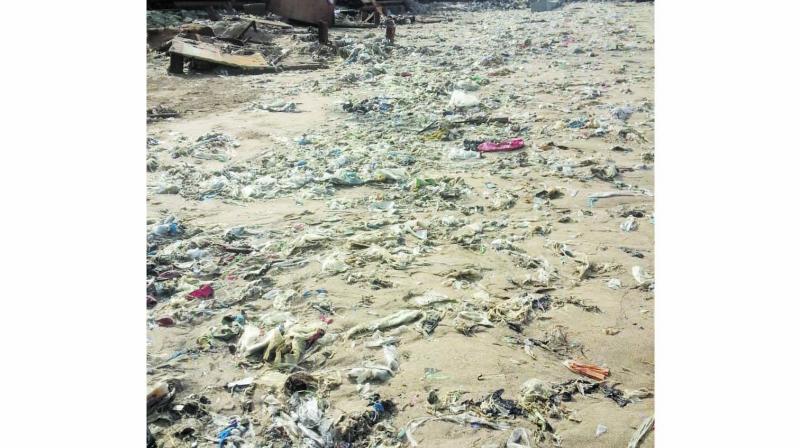 Huge accumulation of plastic was spotted at Girgaum Chowpatty beach in Mumbai.

Mumbai: Mumbai beaches were seen inundated with garbage on Wednesday and Thursday owing to the intermittent rains.

Marine enthusiasts who visited the Girgaum Chowpatty beach said that there was a huge accumulation of plastic on the beach and have raised concerns over the deplorable condition of these sites even before monsoon makes landfall in Mumbai.

Pradip Patade, co-founder of Marine Life of Mumbai, an NGO that conducts marine walk on the city’s shores stated that heaps of garbage washed ashore on Girgaum Chowpatty beach since Monday and is coming regularly on the site. “The garbage is coming from the deep sea due to the Cyclone Vayu that passed parallel to Mumbai’s coast. The strong wind current over the sea that is persisting in city’s atmosphere is bring with it the garbage from the sea,” said Pradip Patade.

He further added that most of the garbage is domestic with piles of plastic bottles. “Apart from this, the beach is getting polluted with tracks of oil that is washing ashore,” said Mr Patade.

The activist has complained to the BMC on the matter.

“During monsoon, strong wind blowing from the sea side towards the land brings the garbage accumulated inside the sea to the city’s shore. However, this time it is Vayu due to which the city has been witnessing rainfall and speedy wind movements. We have already deployed our workers at the site to clean the garbage. Guards are also there to inform visitors about possible sighting of jellyfish and organisms like blue bottle whose sting can cause excruciating pain,” said a BMC official.