CR has gained notoriety for coming to a standstill at the slightest showers. 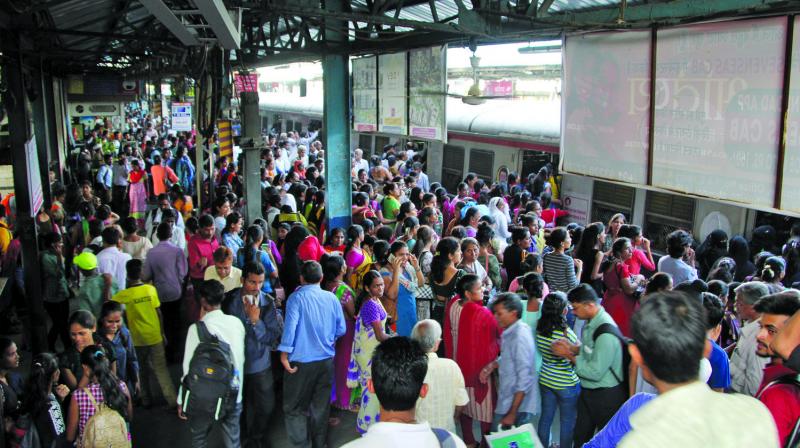 CR officials said only 8 services were cancelled and 15 delayed but almost 70 were delayed by 20 minutes.

Mumbai: Harbour line saw massive delay as more than 25 services were cancelled and nearly 70 delayed as a train broke down near Kurla while travelling from Panvel to CST Tuesday evening. The incident occurred at around 4 pm and services towards CST took a full hour to be restored, said officials.

Commuters who rushed to catch their regular train back home were in for a surprise as services towards not only CST but Andheri, Vashi, Belapur and Panvel were shut down for almost 40 minutes as well.

Manjiri Maindarkar (25), a photographer who resides in Panvel, said that she had to wait from 4.45 pm to 5.20pm to catch a train towards Panvel which again took a lot of struggle to get into at CST itself. “A lot of people came from Vadala to CST in the same train that went to Panvel, so that they could get some sitting space. But in the bargain, people like me had no space to even get into the train,” she rued.

Although central railway (CR) officials said that only eight services were cancelled and 15 delayed, the reality was that almost 70 were delayed by 20 minutes and more.

An official said, “Once the domino effect started at 4.00 pm, peak hour suffered a massive assault on services.” He further added that a vital part of the braking system of the train had come apart and was detected just in time before things took a turn for the worse. “The road that helps create friction when the brakes are hit had come apart and if it hadn’t been detected in time, it would have led to the coach coming off the track as well,” he said.

CR has gained notoriety for coming to a standstill at the slightest showers.