Requests TADA court not to award him death penalty. 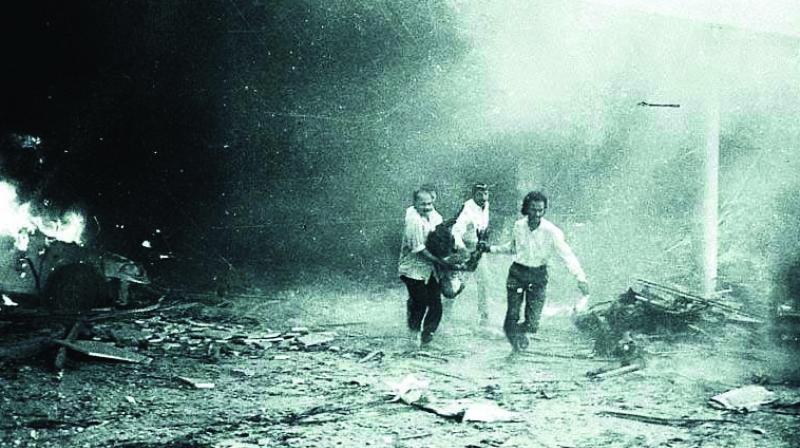 File picture of the 1993 Mumbai blasts.

Mumbai: Major drama unfolded in the TADA special court on Tuesday after 1993 Mumbai serial blasts convict Firoz Khan cried and begged for life before special TADA court judge G.A. Sanap. Khan told the court that he would not seek parole or furlough while in prison. “You can put me behind bars for 25-50 years but don’t give me death penalty,” he pleaded. Khan even produced some documents before the court as evidence to make his case for a lesser punishment.

The court has kept the matter on hold till Wednesday as special public prosecutor Deepak Salvi will cross-examine him. The Special TADA court has started recording statement of convict Khan. He told the court that he has been held guilty under harsher section (sections of 302, 307, 120B of the IPC and section 3 of TADA Act).

As per prosecution, Khan allegedly attended a meeting at Hotel Persian Darbar, Panvel on January 6, 1993 along with the other co-accused. In this meeting, some customs officers agreed to allow Mohammad Dossa and his associates to carry on with their smuggling activities in their jurisdiction on payment of illegal gratification. He also participated in the smuggling of arms, ammunition and hand grenades at Dighi (Mhasla) jetty on January 9, 1993. The prosecution claimed that Khan was one of the main conspirators.

On Tuesday, after the lunch break, Khan, who was sitting on a stool in the witness box, folded his hand and started crying in the courtroom. “My 11-year daughter and 9-year-old son hope that their father is alive some where. They believe that he will be back with them some day,” he said.

Khan said that his family had suffered a lot after his arrest. A resident of Taximan’s Kurla (west), Khan said that his wife and two children were dependent on him. “I have severe diabetes. My eyesight has become weak after living in jail,” he said. Khan, who worked as steward in five star hotels said that initially some relatives rallied around him but eventually deserted his family.

Currently, Khan’s wife works in Dubai as a heena artiste. Khan informed the court that he was doing ‘good work’ inside Taloja prison by teaching English to the other inmates.