Metros   Mumbai  21 May 2017  One killed as bus turns turtle near Powai
Metros, Mumbai

One killed as bus turns turtle near Powai

Imtiaz Shaikh, a 29-year-old relative of the bride and the manager of a tourism firm, died on the spot. 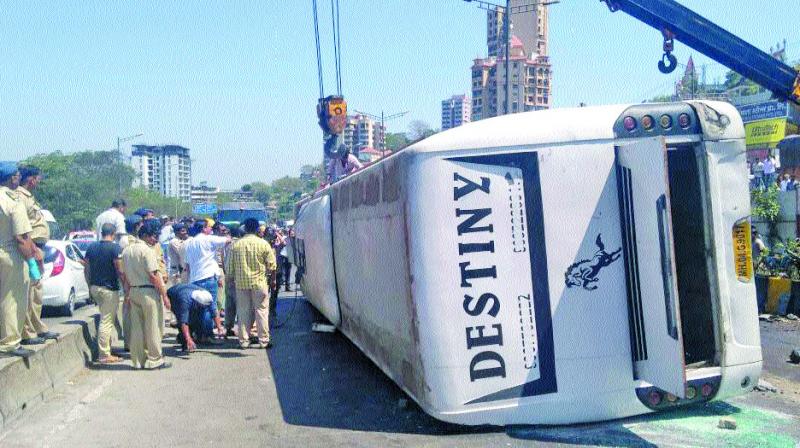 The bus was heading to a wedding reception in Mumbra.

Mumbai: A bus carrying 40 people from Malad to a wedding reception in Mumbra turned turtle around 1 pm on Saturday near Powai’s Gandhi Nagar junction while taking a turn.

While the bus driver has fled, Imtiaz Shaikh, a 29-year-old relative of the bride — who was also the manager of the tourism firm that had provided the bus — died on the spot. Vikroli’s Parksite police has registered a case against the driver, one Sanoj Nishad, and is on the lookout for him.

According to a police officer, the bride’s relatives occupied the bus, which was hired from tourist company Destiny Travels. The couple had got married on Friday.

One of bride’s maternal uncles, Riyaz Momin, who was in the ill-fated vehicle, told The Asian Age, “There were eight children and 25 women on the bus. The bus took a turn and dashed into the divider twice before collapsing on its left-hand side. My nephew Imtiaz, who had arranged for the bus, died as he was sitting beside the driver. We were travelling to Mumbra for my niece’s wedding reception. It has been really shocking for her and the rest of the family. We told her about the accident around at 5 pm. All of us were injured after the accident and an eight-year-old boy had 14 stitches, as his head was badly wounded.”

Speaking about the accident, Mumbai police spokesperson DCP Rashmi Karandikar said, “The bus was hired by a marriage party and was heading to Mumbra for the reception. The bus driver lost control of the vehicle while taking a sharp turn at the junction to enter LBS Marg when it hit the divider.”

According to Sachin Patil, DCP zone 7, the bus was lifted with the help of a crane and the injured were removed after its panes were broken.

The traffic on LBS Marg towards Mulund was hit for over three hours after the incident. Eighteen of the injured were rushed to the privately-run Aniket Hospital and civic-run Rajawadi Hospital,and were later shifted to a hospital in Malad.

Dr Vidya Thakur, superintendent at Rajawadi Hospital said, “We have received 14 patients from the accident, but no one is serious. One person was brought dead. We have admitted eight females and six males.”

Dr Nivedita Gupta, causality medical officer (CMO) of Aniket Hospital, said, “We have received four patients — Mumtaz  Baloj (40), Shamim Baloj (30), Saud Baloj (12) and Huzefa Baloj (8). They are all stable and out of danger. Shamim has 12 stitches on her head, Huzefa has five stitches on his face and head while Saud and Mumtaj sustained minor injuries and cuts. We are awaiting Shamim’s CT scan report, but their relatives are insisting that they be shifted to a Malad-based hospital as they all reside there.”