The marketing people here need to concentrate on visual attractions and the Panvel Municipal Corporation campaign is on right track. 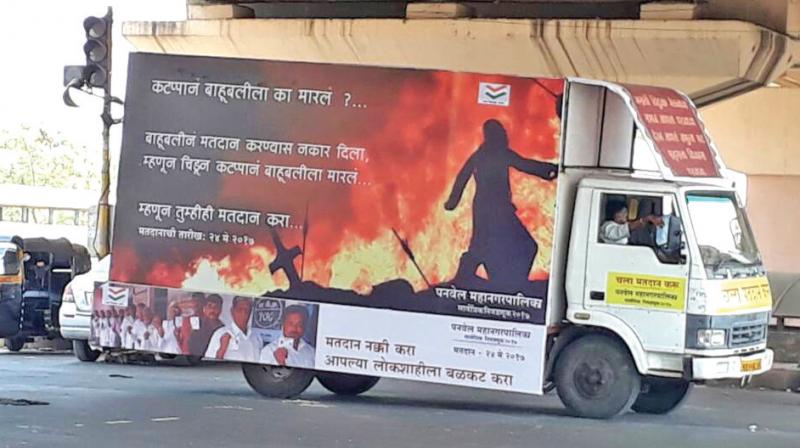 The civic body has put up posters all over the city.

Mumbai: After the Mumbai traffic police made references to the blockbuster film Baahubali in its campaign to promote safe driving, the Panvel Municipal Corporation is using the same strategy to encouraging voters ahead of its polls, which will be held on May 24. The civic body has put up posters all over the city that refer to the famous cliffhanger from the first instalment of the franchise. “Aakhir Kattapa ne Baahubali ko kyu maara? Kyunki usne vote nahi kiya’ (Why did Kattappa kill Baahubali? Because he did not vote),” reads the posters.

Explaining why the rationale behind the posters, commissioner of Panvel municipal corporation, R. Nimbalkar told The Asian Age, “We have put up several such posters on our election campaign vehicles, school walls and bus stations. This idea is to lure people to come and vote on the day of the election, and we expect to get a positive response.”

Tushar Patil, who is a member of the civic body’s marketing team, said, “People had given a tremendous response to Baahubali so it was suggested by one of our team members to model our campaign on it so that people will automatically get interested. We have seen many people standing and reading the posters. Earlier there were common posters featuring cartoons or celebrities to educate people to vote but this time we have changed our method to convince the people to exercise their franchise. I don’t know whether the people will definitely come out to vote or not but we are expecting good results.”

Satyajeet Sathe, a social media marketing expert, who has worked with several multinational companies and handled campaigns for the Thane Municipal Corporation’s election, said, “Most of the people in Panvel aren’t that educated to understand clever ads. The marketing people here need to concentrate on visual attractions and the Panvel Municipal Corporation campaign is on right track.”