FOB collapse: No bail to accused 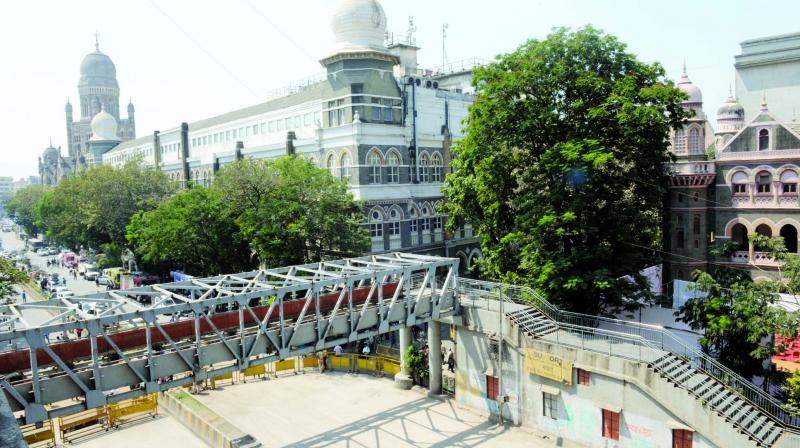 The police had arrested Neeraj Kumar Desai, a structural engineer, and BMC engineers Anil Patil and S.F. Kakulte in connection with the Himalaya bridge collapse.

Mumbai: A sessions court on Saturday rejected the bail applications of two Brihanmumbai Municipal Corporation (BMC) engineers and the auditor, who had conducted structural audit of the Himalaya Bridge outside Chhatrapati Shivaji Maharaj Terminus (CSMT), which collapsed on March 14 killing six people.

Neeraj Desai, the auditor had contended that a structural audit is valid only for six months and the foot overbridge (FOB) outside CSMT collapsed two years after his firm carried out an audit. While the BMC engineers had contended that they have been falsely implicated in the case.

The police had arrested the trio – Neeraj Kumar Desai, a structural engineer, and BMC engineers Anil Patil and S.F. Kakulte of the BMC bridges department last month and they had moved the bail pleas before the session court after the magistrate court rejected their bail pleas.

Public prosecutor Mangesh Arote had opposed the bail applications saying that prima facie a case has been registered against the applicants and at this stage, they shouldn’t be granted bail. He had also argued that the applicants have good relations with the BMC officials and the probe into the case was still underway and hence the possibility of tampering with witnesses and evidence cannot be ruled out.

According to police, Desai’s firm declared the bridge safe despite spotting some corrosion. While Desai contended that the bridge collapsed two years after he carried out the audit and hence he could not be blamed, as there were two monsoons thereafter and many more other climate factors that could have caused the collapse.

After hearing the arguments, additional session’s judge M.S. Azmi on Saturday rejected bail pleas of all three persons. The FOB, which was constructed around 40 years ago, collapsed on March 14, 2019. Six persons were killed and several others were injured when the FOB collapsed during the evening rush hour.