Drivers of these companies have come together for the first time in such a way. 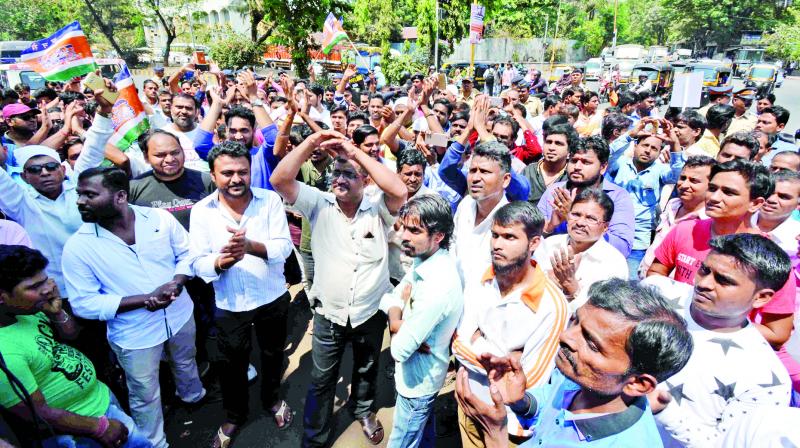 The MNS transport cell is in support of the strike.

Mumbai: The indefinite strike of Ola and Uber drivers, which is supported by Maharashtra Navnirman Sena’s (MNS) transport cell and other unions, entered its second day on Tuesday. The strike was in force even as the Central Railway (CR) network got disrupted in the morning due to a strike by railway job seekers.

An Uber spokesperson said, “Over the last 24 hours, a large number of our driver partners in Mumbai and Pune have reached out to us after they were forcefully asked to go offline by a small group of protesters. These protests continue to inconvenience riders and have impacted our ability to serve the city.” Almost 40,000 Ola and Uber drivers were off the road on Monday as well as on Tuesday. Ola representatives have said that officers from company’s side would hold negotiations with drivers, and their names would be submitted before 12 pm on Tuesday. However as they didn’t mention the names till 4 pm on Tuesday, the  drivers continued their strike.

Sanjay Naik, chief of transport cell of MNS, justified the strike, saying, “We couldn’t call it off as our demands are important. Drivers of these companies have come together for the first time in such a way. So without getting proper assurances, had we called off the strike, those drivers might have felt betrayed.”

Meanwhile, Uber issued a statement which claimed that the strike was being forcefully conducted by a ‘few protesters’ and a large number of drivers wanted to continue their service.

The Asian Age tried to contact Mr Naik for his reaction on the issue but he couldn’t be reached. Sources said that talks between Ola representatives and MNS union members were on till late on Tuesday night, but no decision was reached.