Commuters’ train ride to hell and back

Travellers were greeted by overcrowded stations, had to alight from halted trains. 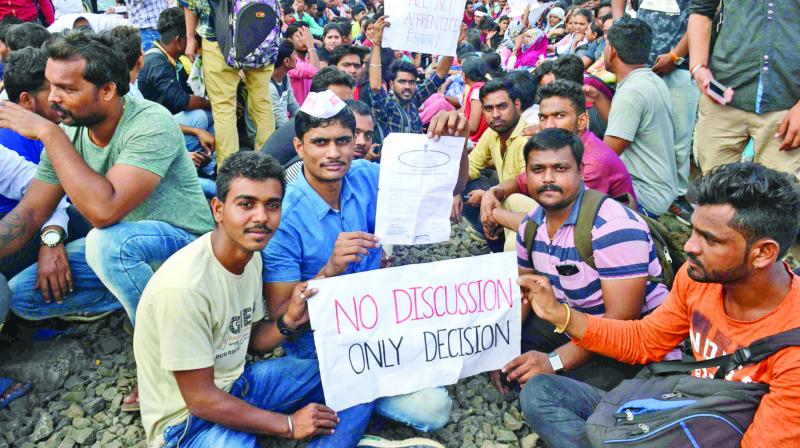 Many commuters were stranded at the station. “It was so crowded that I felt suffocated and had to return home,” said Tukaram Salunkhe (64) who has left home at 9 am to reach Thane.

Mumbai: For hundreds of commuters stranded at Dombivali and Thakurli stations, Tuesday morning was a torturous ordeal.

Central Railway operations were disrupted after agitators put up a demonstration at Matunga. With the line of trains standing by on the tracks reaching Kopar station, many commuters at Dombivali station started returning home after a wait of almost two hours.

Santosh Gosavi (38), who catches the 9.15 slow local to Chhatrapati Shivaji Maharaj Terminus (CST), was taken aback when he reached Dombivali stat-ion. “I got 9.03 pm train, which came late. There was chaos on the platform. There was huge rush, but I managed to get in. Our train halted after Diva. So, we got down from the train and walked to Diva station,” he said. “The protesters should not have done this, whatever their concerns are,” he said angrily.

Many commuters were stranded at the station. “It was so crowded that I felt suffocated and had to return home,” said Tukaram Salunkhe (64) who has left home at 9 am to reach Thane. “I avoid taking the train in the morning, but I had appointment at the pension office. So, I had to catch the 9.11 local. I waited at platform number two for 20 minutes, but there was no sign of improvement,” he said.

Yogesh Prabhu (28) did not fault the protesters, as the issue of unemployment is ‘serious’. “I wanted to go to Ghatkopar. My office is at Chakala. But I decided to take leave after coming to the station. Empathising with the strikers, he said, “People don’t have jobs. What will they do other than protest?”

Meanwhile at other stations, similar circumstances prevailed. Nara-yana Sripalam (40), who works in an advertisement firm at Curry Road, said, “I had no idea that such a thing would take place. I had to jump from the halted train and make for my office on foot.”