Over 4,000 resident doctors are staying away from work since yesterday demanding better security for them at the hospitals. 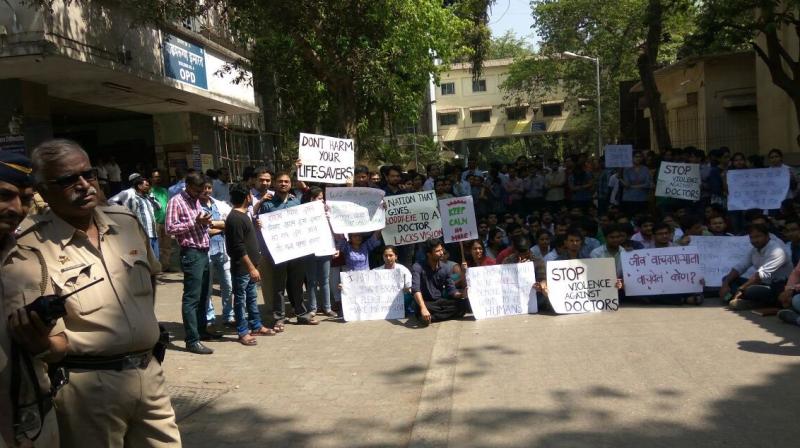 Doctors sitting on silent protest outside OPD at Sion Hospital after recent incidents of violence against doctors. (Photo: ANI Twitter)

Mumbai: The resident doctors in Maharashtra's government hospitals abstained from duty for the second day today as a part of their protest against attack on their colleagues, partly affecting the state's healthcare system.

Over 4,000 resident doctors are staying away from work since yesterday demanding better security for them at the hospitals.

In the absence of the resident doctors, the medical services in the Out Patient Departments (OPDs) were primarily affected, a senior official of Maharashtra Association of Resident Doctors (MARD) said.

However, the emergency health services, including taking care of accident patients, surgeries and providing post-operative care to those admitted in various hospitals, were being maintained by senior doctors, he said.

Some of the resident doctors have availed leave, while the others are not reporting to duty. They are claiming that a large number of relatives come along with the patients and this puts pressure on them and affects their working.

They have been protesting against some recent incidents, including in Dhule and at the civic-run Sion hospital in Mumbai, where relatives of patients attacked the respective doctors in-charge.

A meeting held last night between Maharashtra Principal Secretary for Medical Education, Rajagopal Devara, and representatives of the resident doctors failed to resolve the deadlock.

The MARD, the apex body of resident doctors, has officially distanced itself from the decision of doctors to stay away from the duty.

"The Maharashtra government has moved a proposal of deploying at least 500 security personnel in the first phase at government-run hospitals. The security men would start working from April 1. But it is up to the resident doctors to take a decision over this proposal whether to resume the duty or remain away," a senior MARD official said.

A resident doctor from Sion hospital said, "Restrict the number of relatives flocking in with patients to government-run hospitals. The crowd affects the medical services and puts pressure on doctors attending the patients."

"If the government starts implementing it strictly, it will bring much relief to the doctors," he said.