Leopard on prowl in mall captured

Officials managed to rescue the big cat after 6 hour operation. 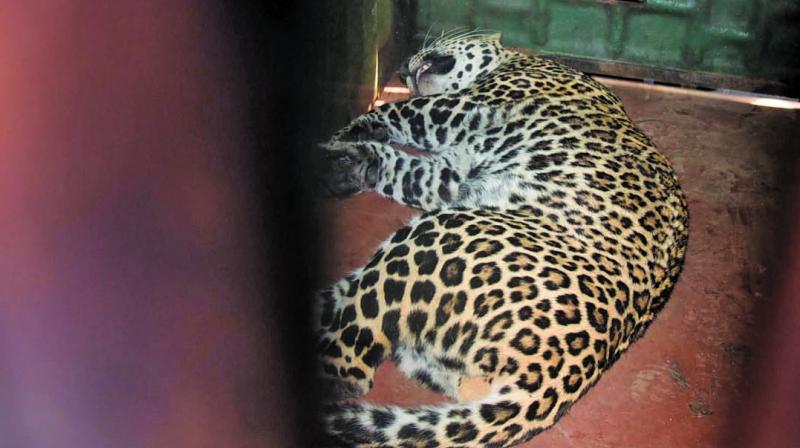 A leopard was seen lurking near Korum Mall.

Mumbai: A leopard was seen lurking near Korum Mall located on the Eastern Express Highway at around 5.30 am in Maharashtra’s Thane district on Tuesday. The forest officials managed to rescue it after an operation of six long hours.

The leopard was first spotted near the fencing wall of the mall and later it moved around for sometime before finally taking refuge inside the basement of a three star hotel, officials said.

The CCTV cameras showed the leopard hiding behind a staircase, before running into a dark corridor. Residents and passersby in the area were told not to venture out, an official said.

The feline was first thought to be a panther but after the forest officials reached the spot, they confirmed that it was indeed a leopard. “After starting the operation early in the morning, the leopard was taken into custody at around 11.50 am. The operation also involved Thane police,” said a senior forest official said.

The police and forest department were immediately informed about the same. After their teams reached the spot they launched a hunt for the leopard inside the mall premises. However, the search was called off after three hours as the officials failed to spot the big cat.

The leopard was later spotted at a housing complex and then in the basement of the hotel near the mall. The forest officials finally managed to tranquilise the feline in the hotel basement before taking it away.

The police had cordoned the area and kept the hotel staff off bounds while the operation was underway. The traffic movement on the EEH and Pokhran roads were not affected, officials said.

The hapless leopard will undergo a medical check and would be released in the Sanjay Gandhi National Park, forest officials said.