Inspired by the marine interpretation centre in Airoli, the same will be ready by the year-end, according to the Mangrove Cell officials. 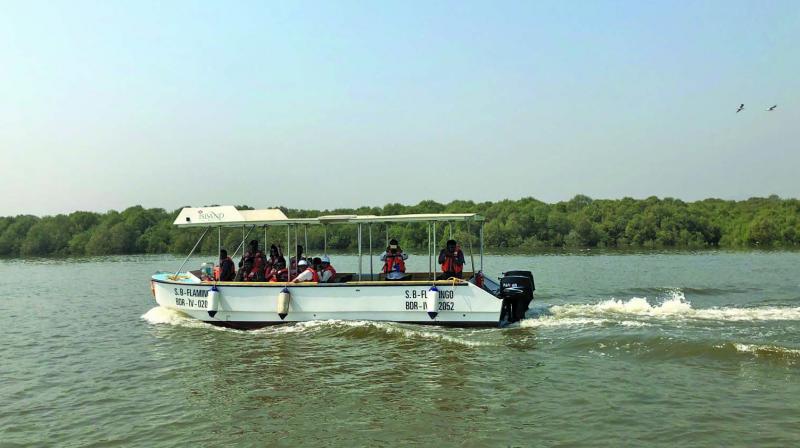 Boat ride started between Airoli and Vashi earlier this month

Mumbai: After Navi Mumbai, now Mumbai suburban will be getting a marine interpretation centre, at Dahisar mangroves. In an attempt to revive the mangrove stretch along Gorai creek and to check upon the encroachment in the mangrove areas, the Mangrove Cell is going to start boat rides along the stretch. Dahisar MLA, Manisha Chaudhary took a boat ride through the stretch to inspect the site on Sunday.

Inspired by the marine interpretation centre in Airoli, the same will be ready by the year-end, according to the Mangrove Cell officials. “The project has  been sanctioned and we have already invited tender for its design,” said Makarand Ghodke, assistant conservator of forest, Mangrove Cell. To revive Dahisar mangroove, the interpretation centre will also have broadwalks and tourists will be apprised with the diversity of the birds that visit the mangrove stretch.

“The visitors can in person witness the variety of mangroves, birds and fish, the stretch houses. Experts will be there to provide knowledge on the same. The present as well as future generation could know about the importance on mangroves in the city,” said Ms Chaudhary. Earlier this month boat rides between Airoli and Vashi stretch was started. “We have got surprisingly good response from the citizens. We will try to replicate the same at the Gorai creek. There will also be strict no-food policy for the boat-rides,” added Mr. Ghodke.

While activists have welcomed the move, they have asserted that Dahisar river needs to be cleaned to prevent polluted water entering into the creek.

“Dahisar river is plagued with sewage water and dumping by the nearby "tabelas". The whole mood of boat ride will be spoiled due to the terrible stench of polluted water entering into the creek. Although the project is a welcome move, authorities also need to prioritise revival of Dahisar river,” said Gopal Jhaveri, Member of River March, citizens group working towards rejuvenation of rivers.