Weathermen attributed the increase in air pollution to the fluctuating temperatures which have ranged between 10 and 13. 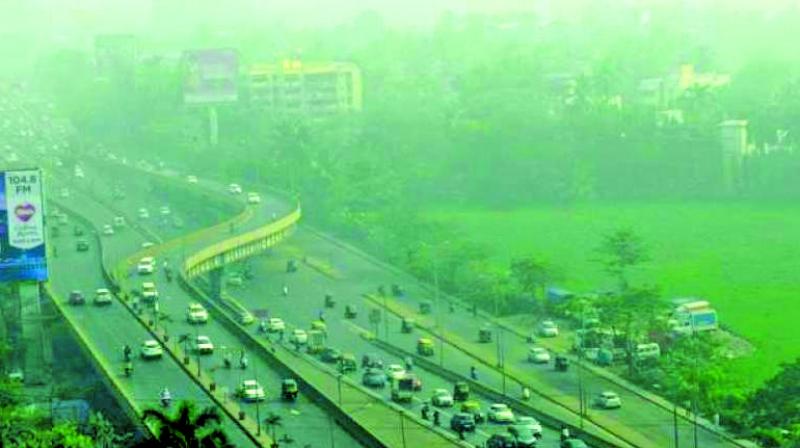 The AQI recorded at 207 on Monday.

Mumbai: Mumbai’s air quality has started deteriorating since the last weekend, with the air quality index (AQI), an indicator of pollutants in the air, recorded at 207 Monday which comes under the “poor” category, according to the System of Air Quality and Weather Forecasting and Research (SAFAR).

The overall PM10 level- particulate matter of or less than 10mm in diameter which mostly arises from dust pollution - was recorded at 174 (moderate) Monday.

The PM2.5 — fine particles with diameter less than 2.5mm mostly arising from vehicular and industrial emissions — was recorded at 91 (poor).

Weathermen attributed the increase in air pollution to the fluctuating temperatures in Mumbai which have ranged between 10 and 13 degrees Celsius over the last three days.

“The spike in air pollution could be due to the sudden altering of temperature over the last few days. While the city saw significant lower minimum temperature between 10 and 13 degrees Celsius, the mercury started rising by the weekend. As such, pollutants moved closer to the surface. The pollution was also aggravated due to the low wind movement Sunday,” said Gufran Beig, project director, SAFAR.

The Bandra-Kurla Complex (BKC) recorded the worst air quality Monday at 289 AQI. This was followed by Malad (266), Andheri (231), Mazagaon (222) and Worli (208). Borivali recorded a minimum temperature of 14.6 degrees Celsius followed by Goregaon at 16.3 degrees Celsius.