In wake of fire, neighbour says he told him not to build extra floor. 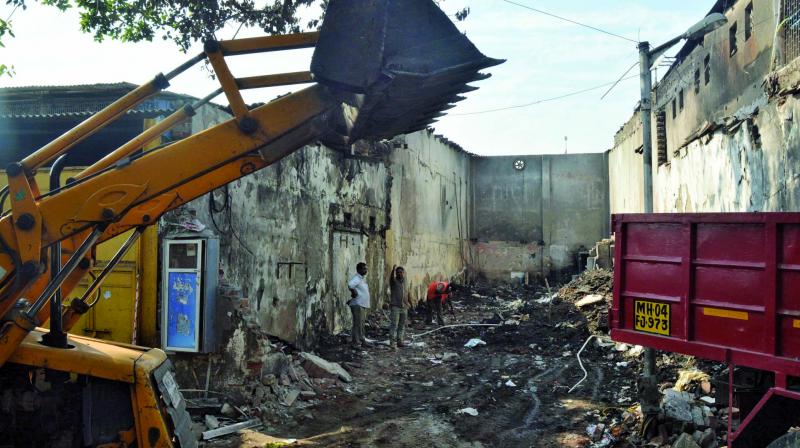 The site of the farsan shop where the fire broke out in Sakinaka. (Photo: Rajesh Jadhav)

Mumbai: Ramesh Bhanushali (38), the owner of the Sakinaka-based farsan shop in which 12 sleeping workers died in a fire on Monday, did not allegedly heed his friend’s advice against building the illegal structure, according to the police. Bhanushali was arrested for building an illegal extra floor and not following fire-safety norms. An Andheri court remanded him to police custody for five days on Tuesday.

Twelve workers were burnt to death and another was injured when a massive fire broke out at a farsan shop-cum-factory in Sakinaka in the wee hours of Monday. Seven others managed to escape without injuries. According to police officials, the accused first build an illegal mezzanine floor and ensured that it could accommodate more than 20 workers. He also stored, in an unauthorised manner, kerosene worth more than 10 litres and LPG cylinders in the shop, all of which aggravated Monday’s fire, which was caused by a short circuit, said sources.

Sakinaka senior PI, Avinash Dharmadhikari said, “It is clearly the owner’s fault. Firstly, he had kept inflammable liquids in large quantities. Secondly, he was making his workers sleep in the same place, which is also illegal. Also he didn’t have any fire extinguisher. He has done several illegal acts and is totally responsible for the death the of 12 workers.” Bhanushali was sent to police custody for five days on Tuesday.

One of Ramesh’s neighbour-cum friend, who came to meet him, Mr Sham Tiwari, said, “I had already told him not to build an extra floor but he didn’t listen to me. It was his business so even I didn’t force him. We all tried to douse the fire but we couldn’t do anything.”

On Monday, the police control room received their first call about the fire at 4.30 am and the first mobile of Sakinaka police arrived at the scene within 10 minutes. The fire brigade arrived at the same time and started rescue operations.

Past Tragedy
In 2015, seven students from a Kurla-based technical institute died in a fire that broke out in a Chinese food joint. They were all trapped on the first floor. A gas leak on the first floor followed by something that sparked led to the fire. The first floor that went up in flames did not have more than 100 square feet area. The fire caused the connecting staircase to the upper floor to collapse, leaving the eight people trapped upstairs.