MPCB sent notice to BMC over pollution at Sakinaka

In October, incidentally, Chandivali residents in L ward had staged protests against air pollution in the area. 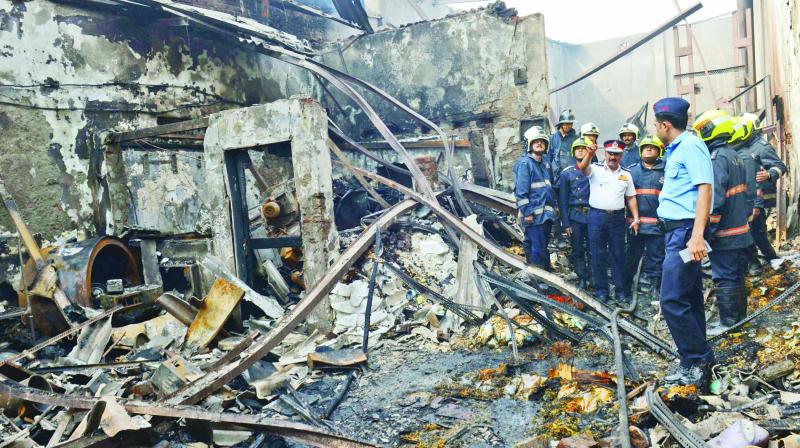 Twelve people died in the Sakinaka fire on Tuesday.

Mumbai: The Brihanmumbai Municipal Corporation (BMC) has pleaded ignorance about the illegalities in the Sakinaka farsan shop where 12 workers were charred to death in a fire on Monday, but it has emerged that the Maharashtra Pollution Control Board (MPCB) had served it a notice to crack down on air-polluting units at Khairani Road, where the shop is located.

In the notice, which was served a month ago, MPCB directed the civic body to cut the water and electricity connections of such units. The civic body, however, denies receiving the notice.

When asked, Ajitkumar Ambi, the assistant municipal commissioner of the 'L' ward (which includes Sakinaka), claimed that the BMC did not get any notice from MPCB pertaining to air pollution, but it did receive a notice asking it to crack down on factories polluting the Mithi river.

"We got a notice from the MPCB to take action against the factory outlets along the Mithi. Around 575 such locations were marked and action was taken against them," Mr Ambi said. He added, "The air pollution notice might have been sent to the environment department, I did not get it in my ward office."

The civic body has also said that it was unaware about the illegal activities, including the construction of the mezzanine floor on which the ill-fated workers were sleeping, since the owner did not seek any licence and no complaint was registered against him.

On the other hand, an MPCB regional officer, who requested anonymity, said, "We had sent a notice to civic body alerting it about the air polluting industrial units in the 'L' ward, which also includes Khairani Road." He said, "After this, the MPCB had initiated a few measures to tackle the problem."  In October, incidentally, Chandivali residents in L ward had staged protests against air pollution in the area.

Meanwhile, the labour commission has written a letter to the civic chief, demanding compensation for the deceased and the speedy clearance of the same. The BMC is likely to book Bhanushali over alleged irregularities as well soon.