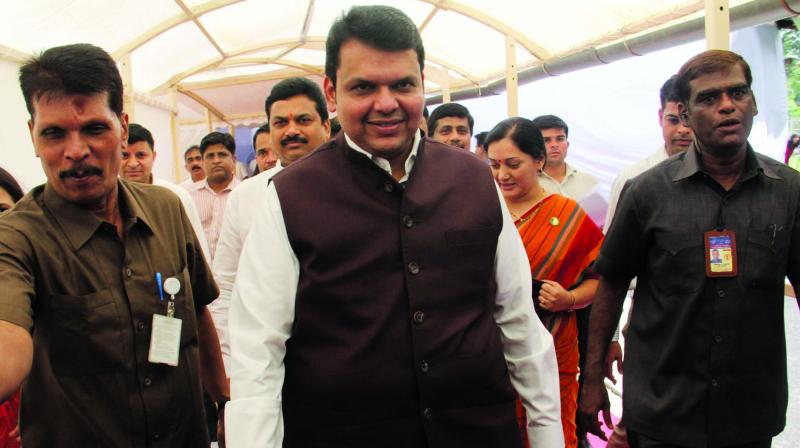 Nagpur: Dismissing claims on the anti-incumbency factor having adversely impacted the Bharatiya Janata Party (BJP) in the Gujarat Assembly elections, chief minister Devendra Fadnavis on Tuesday said that the Gujarat poll verdict has only made his government in Maharashtra stronger and more stable. “Those who were jumping prior to the poll results had to fall flat. The results have made us only stronger and more stable,” said Mr Fadnavis. Though he didn’t name anyone, his taunt was aimed at the Shiv Sena, the sulking minor partner in his government, sources said. Mr Fadnavis expressed his views on range of issues in a meeting with the press in Nagpur.

Talking about the Gujarat elections, Mr Fadnavis claimed that the results also suggest that voters do not trust the Opposition, especially the Congress. “The number of seats that we have won might look less than last time, but we have fetched almost 50% of the votes. It clearly shows that people stood strongly by us.
Even in Maharashtra, people are voting for us and the Sena in some places. They do not want Congress and NCP,” he claimed.

The CM also tried to debunk claims about his party is losing its grip in rural areas. “There is nothing called rural distress. Even in Maharashtra, the Opposition’s farmer rally was much smaller than our (BJP’s) farmer rally in 2013,” he said. Speaking on issues ranging from re-inclusion of Eknath Khadse in the state Cabinet to Asia’s biggest oil refinery being set up in the Konkan, Mr Fadnavis claimed his party workers were coordinating well with the Sena.

“Khadse has not been isolated; he is, rather, a top leader in the party. He or Narayan Rane (who has recently quit Congress to form his own party) may be outspoken, but are experienced politicians. I think that it more important,” he said, when asked about Mr Khadse’s return.

“Rane has joined the NDA and now he will be well taken care of,” he said, adding that his inclusion in state Cabinet will not be from the Sena’s quota and hence any question of Sena being unhappy does not arise.

Voicing his support for the oil refinery, which is presently facing stiff opposition from locals as well as the Sena, Mr Fadnavis said that the opposition is the planted work of certain ‘commercial NGOs’ which come from as far as Mumbai or Chennai and have no stakes in the area. “Chembur has had a refinery for years now. Did anyone die there? These claims are being made due to lack of knowledge,” he said.

“These days, even an agitation has become a business. Why are these commercial NGOs making a noise in areas where they have no association?” he asked, claiming that the project may bring one lakh jobs to the area.