Had no agenda in Malegaon probe: NIA

Refutes claims it tried to negate the effects of earlier investigation by ATS and CBI. 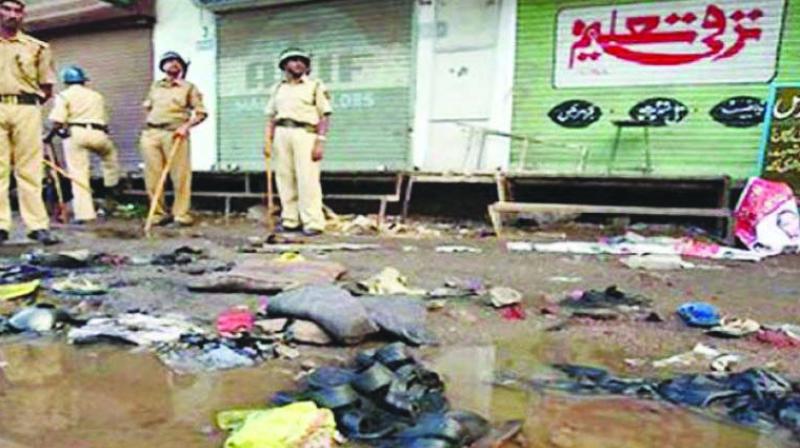 The NIA affidavit stated training camps were organised in Indore where bombs were prepared and then transported to Malegaon.

Mumbai: The National Investigation Agency (NIA) has refuted allegations of the state Anti-Terrorism Squad (ATS) that it conducted investigation in the 2006 Malegaon bomb blasts case in a pre-determined and calculated manner to negate the effects of earlier probe by ATS and CBI. Though the NIA had filed this affidavit way back in November, the matter came up for hearing on Monday but due to paucity of time the Bombay high court adjourned hearing on the issue till January 19, 2017.

The affidavit was filed in reply to the allegation that investigation by the NIA in 2006 Malegaon blast case was pre-meditated, however affidavit in reply to the appeal filed by ATS and other set of accused — who are now facing the trial — is yet to be filed.

“It is not correct to say NIA conducted investigation in a pre-determined and calculated manner to negate the effects of earlier probe by ATS and CBI,” said superintendent of police, Vikram Khalate (NIA), in the affidavit.

According to NIA’s affidavit, the agency arrived at the conclusion that the blasts were carried out by members of a ‘Hindu right wing’ organisation only after a thorough probe was carried out.

The affidavit further stated that NIA’s probe has found that training camps were organised in Indore where bombs were prepared and then transported to Malegaon.

Refuting the claim of ATS that accused Mohammed Zahid Ansari had planted bombs, NIA claimed that it was Manohar Narwaria, Rajendra Chaudhary and Ramchandra Kalsangra who planted bombs in Malegaon on September 8, 2006. The reason for targeting Malegaon, NIA said, is that the accused wanted to set off bombs in a Muslim-dominated area so that it would result in communal riots between Hindus and Muslims.

“It is revealed in NIA probe that on the day of the blast, Ansari was in Yavatmal, which is about 400 km from the blast site. Twelve witnesses have supported this,” it said. It further claimed that Shabbir Batterwala, who according to ATS had supplied explosives, was arrested by Crime Branch Mumbai and was in judicial custody from August to September 2006. It is mentioned in the affidavit that Swami Assemanand, accused in the Mecca Masjid blast, in his statement has said the Malegaon blast was a handiwork of “his boys”.