A local spotted the dog on Saturday around 12 pm near Malwani church. 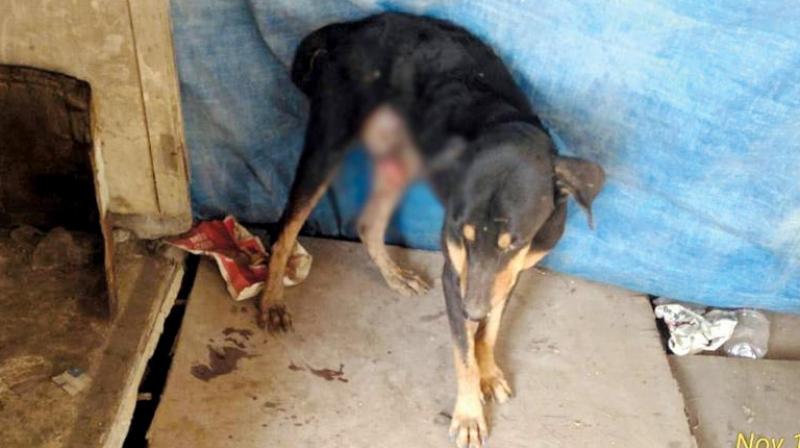 An FIR has been filed under Section 11 of the Prevention of Cruelty to Animals Act, 1960, at the Malwani police station.

Mumbai: Four men allegedly brutally sexually tortured a male dog in Malwani in the wee hours of Saturday. The dog, which is usually seen near the Malwani Church area, went missing for a day, after which it was again spotted bleeding profusely and with its genitalia mutilated. An animal welfare non-government organisation ‘Animals matter to me’ (AMTM) stated that the dog has been taken to a veterinary doctor where it is getting stabilised.

“The dog is in severe trauma. Whenever someone would come near or try to touch it, it would get scared or scream. Its private parts are mutilated in such a way that it could not happen unless someone forcibly harmed it. It appears that someone tried to fold its hind legs near the pelvis. Presently, we are trying to stabilise the dog. It is under medication for the pain. We are trying to reduce the infection as it was bleeding for an entire day,” said Dr Ankita Pathak, founder of AMTM.

Sudha Fernandes, a local resident who regularly feed the dogs in the area, stated that she spotted the dog on Saturday around 12 pm while it was lying down near the church area. “My husband, after seeing the dog, informed me about its condition and told me that it needs food. When I first went to the dog and tried to touch his leg, it responded in fear and tried to move away. I kept the food in front of the dog, after which it ate it properly. It is then when I saw that its penis was badly injured and it was bleeding a lot. Even when the dog was trying to change its position while lying down, it was in great pain,” said Ms Fernandes, who will be filing a police complaint.

An autorickshaw driver then informed Ms Fernandes that at around 2 am on Saturday, the dog was brutally raped by four men, who were under influence of drugs. “He told me that the dog needed to be immediately admitted.  The dog’s front legs were tied and its mouth gagged while it was sexually tortured. Its loud screams alerted the driver, but the accused fled from the spot,” she said.

When Ms Fernandes tried to get hold of the dog, it resisted after which she went to her residence to bring more food but came back only to find it missing and could not be spotted the whole day. However, while looking for the dog, around 11 am on Sunday, she finally found him near a temple and informed the NGO.

“We are trying to locate the auto driver who witnessed the incident. We will lodge a formal police complaint based on his testimony,” Ms Fernandes said.

An FIR has been filed under Section 11 of the Prevention of Cruelty to Animals Act, 1960, at the Malwani police station.