Upon enquiring with the shop owners, they said it was better for the students to be shifted as it was life-threatening to have them sit beside the DP. 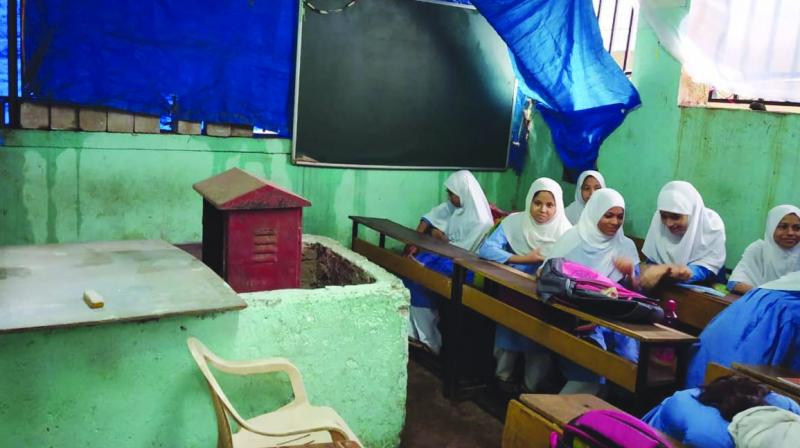 Students sit beside a live electric transformer or DP located inside the classroom.

MUMBAI: Although schools are meant for the education and overall development of students, the same cannot come at a risk to their lives. The Nerul-based aided Al Hasanat Urdu School is one such example, where students sit beside a live electric transformer or DP located inside the classroom. Despite having been served notice to vacate the place in view of students’ safety by the Navi Mumbai Municipal Corporation (NMMC), no action whatsoever has been taken.

Inayat Khan, one of the trustees of the school has been fighting with the school authorities to get them to vacate the place and transfer the students to a safer location but in vain. “There are close to 250 to 300 students who are risking their lives every day because of the electric DP located inside the classroom. Owing to the circumstances, there can be short-circuit which can be very dangerous for both teachers and students inside the school,” Mr Khan told this newspaper.

When The Asian Age visited the school, the DP was found quite active and supplying electricity to nearby shops. Upon enquiring with the shop owners, they said it was better for the students to be shifted as it was life-threatening to have them sit beside the DP.

“The school is quite old and the students of the school are quite young to understand these things. In case, while running around the transformer, anyone touches it or falls on it, it can backfire such that nobody will then be able to give any explanations,” said a nearby shopkeeper.

Sanjay Tayde, Nerul ward officer, told this newspaper that two months ago, a strict notice had been sent to the school officials, including the trustees.

“I myself have visited the school so I know how dangerous it is and that is the reason a notice to vacate the school has been sent. We have ordered that the entire structure be demolished and it be kept only for the transformer or DP. However, the school people told us that vacating the students now would create chaos and hence, they would do it as soon as the vacation started,” Mr Tayde said.