The rains affected the Western and Central railway services, causing inconvenience to people. 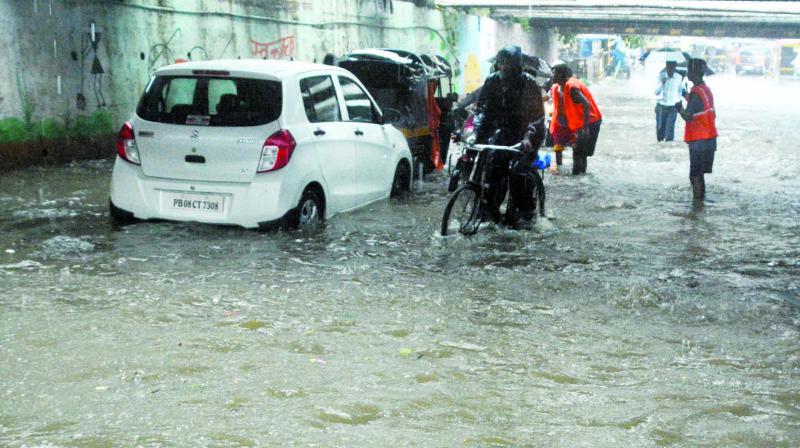 A subway in Andheri is waterlogged due to heavy showers on Tuesday. (Photo: Mrugesh Bandiwadekar)

Mumbai: After a lull of almost a week, heavy rains arrived in the city with thunderstorm and lightning on Tuesday. Though it caught office-going Mumbaikars off guard, it also brought them relief from heat and humidity, which had been prevailing in the city for the past few days. However, the rains affected the Western and Central railway services, causing inconvenience to people.

Taking a cue from the hardships faced during the downpour on August 29, Mumbaikars remained extra-cautious as offices, schools and colleges were shut early so that people reached home on time. “I left early just to ensure that I do not get stranded in office once again. On August 29, we had to spend the entire night in office due to rains,” said a Bhandup resident Anup Shrungare.

In the backdrop of the death of well-known gastroenterologist Dr Deepak Amrapurkar, the Brihanmumbai Municipal Corporation (BMC) too cleaned drain entrances on priority basis during the rains.

Tuesday had begun with bright sunshine, showing no traces of rains. However dark clouds started gathering in the afternoon and it soon started raining heavily, accompanied by lightning. The suburbs bore the majority of the brunt with some of the areas witnessing waterlogging. Spots that witness chronic flooding like Milan, Khar, Andheri, Malad, Poiser and Mankhurd went under water.

“We started 127 dewatering pumps across the city to ensure that water is discharged quickly from flooding spots. Of them 71 were in western suburbs, 46 in eastern suburbs and 10 in island city,” said a senior civic official.

The rains had their effect on railway services too. The CST-Andheri section was shut down for over half-an-hour after the branches of a tree on the section fell on the track between Vile-Parle and Santacruz. The incident occurred at 2.40 pm and the branches were cleared by 3.05 pm.

The Central Railways mainline on the other hand saw delays with services seeing a delay of 15 to 20 minutes. There was also confusion as announcements that spread panic among commuters were taken off the public announcement system. The announcer had said commuters should take the first train they get and make their way home but due to the panic created by the announcements, it was stopped.

Due to lightning, there were also disturbances in the TV network in some areas, depriving people from getting information from news channels.