The weather bureau issued an alert at 8 pm predicting “intermittent heavy spells” in the next 48 hours in the city and suburbs. 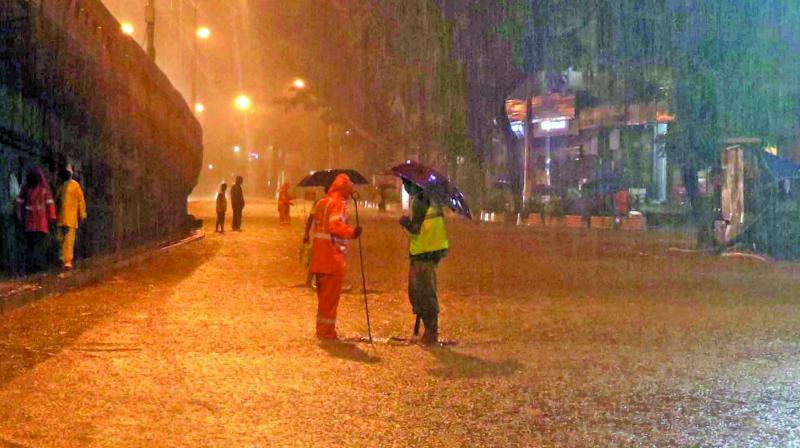 Mumbai: Just when Mumbaikars thought days of incessant rains and floods were over, heavy rains lashed Mumbai, Thane and adjoining areas on Tuesday.

The weather bureau issued an alert at 8 pm predicting “intermittent heavy spells” in the next 48 hours in the city and suburbs. However, an initial report by the meteorological department warned of heavy rainfall for the next four to five days in the state with an active monsoon spell during this period.

Meanwhile, school education minister Vinod Tawde tweeted that schools were instructed to remain closed on Wednesday as a precaution. “This holiday will be compensated in Diwali (sic),” he said.

The civic body started 182 pumps to discharge water from flooded areas. Of them, 48 were installed in island city, whereas in the eastern and western suburbs 57 and 77 pumps were pressed into action respectively. In Bhandup, two people were injured after a boulder collapsed on eight houses at Khindipada.

The locals rescued Vijender Jaiswal (27) and Krishna Yadav (24) and admitted them to MT hospital, Mulund.

The Brihanmumbai municipal corporation (BMC) received 34 complaints of tree falling, maximum among them at city (15) and western suburbs (14).

With the IMD predicting more rain on Wednesday, the School Bus Owners Association informed schools that their drivers would not be plying the buses in the morning lest the children get stranded due to water logging which is being anticipated due to high tide.

Anil Garg, chairman of SBOA however said that it would be taking a final call on whether to ply their buses at 5 am. While the rains started mid-afternoon, schools remained unaffected in the suburbs though a few schools in the island city cancelled classes to enable students to leave early.  The incessant rains affected railway services on the Harbour and Central line with trains being delayed by 20 minutes. Services on the western line were also disrupted in the evening due to a signal failure at Bandra station. According to the Mumbai traffic police traffic was heavy for most part of the evening till 10 pm as the vehicles were moving slow between some stretches on the western express highway and at Amar Mahal junction at Chembur leading to the eastern express highway. Traffic was also moving slow at the J J flyover due to traffic build up near the Mazgaon junction till 9.30 pm.