The MSF personnel are currently hired on contractual basis. However, the strike did not affect the Metro services. 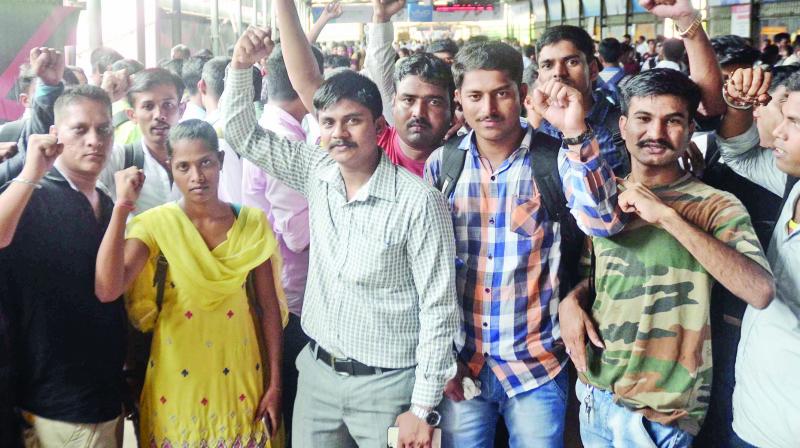 The staffers protesting to be employees. (Photo: Shripab Naik)

Mumbai: Around 500 Maharashtra Security Force (MSF) personnel, who have been deployed to provide security at various places including the city airports and Metro-1 (Versova-Andheri-Ghatkopar line), went on strike on Tuesday, demanding permanent government employee status. The MSF personnel are currently hired on contractual basis. However, the strike did not affect the Metro services.

In a bid to tackle the strike, Metro-1 authorities sought help of the Mumbai police. The metro authorities subsequently also hired a private security firm to avoid any untoward incident.

Looking at the ruckus created by the flash strike, the transport authorities immediately made alternative security arrangements on Tuesday morning. The Mumbai police provided the security assistance for Metro-1, where huge crowds were stranded on the entry and exit gates at the Ghatkopar Metro station. The massive line of passengers at the Ghatkopar Metro station’s ticket counters and inspection counters were also witnessed. However, this did not affect the functioning of the trains or resulted in any delay or cancellation of metro services.

A Metro-1 spokesperson said, “Some MSF staff did not report for duty without any notice. MSF is not metro staff but is deployed by the state government for the security of Metro-1. Keeping in mind the convenience and security of commuters, Mumbai Metro-1 has promptly deployed the alternative arrangements. We have also apprised the state govt, MMRDA and Mumbai police for assistance. Metro services are not affected.”