Mumbai can look forward to quiet date with Ganesh

In July 13, the Bombay HC had directed the state to implement orders directing it to maintain noise levels. 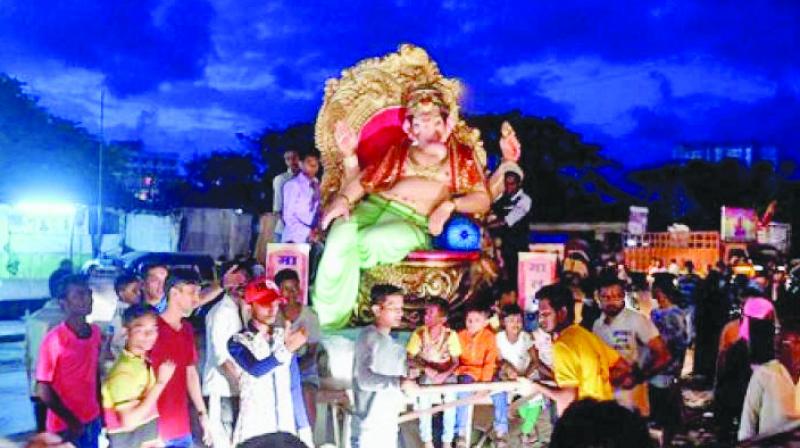 Decibel levels are expected to be lower this year.

Mumbai: It seems that Mumbai will witness a less noisy Ganesh Chaturthi this year. After the Bombay high court order refusing to exempt mandals from noise pollution norms, most mandals claimed to have undertaken necessary preparations to abide by the rules. A few mandals like ‘Seewri cha Raja’, ‘Lalbaugcha Raja’ and ‘Ganesh Galli’ said that they have been obeying the courts order to abide by the noise pollution rules.

Both the mandals at Ganesh Galli and the Lalabaughcha Raja maintained that they use loudspeakers only for coordinating with devotees who queue up for ‘darshan’.

Sumaira Abdulali, the founder of Awaaz Foundation, one of the petitioners of noise pollution in the HC said, “The mandals should themselves be aware of the rules and maintain silence in the silent zone, obey the decibel limitation and time restrictions.” Abdulali added, “There has been a lot of awareness in the last few years. Last year, the noise pollution was better as people cooperated.” Mumbai’s oldest and most traditional Ganesh mandal in Keshavji Naik Chawl in Girgaon will be celebrating 125 years this year. Mr Bhalechandra Gharat, chairman of the sanstha said, “We will stick to our traditional look. Special care is being taken to ensure an environmental friendly Ganesh mandal. No thermocols, no loudspeakers are ever used by us.”

In July 13, the Bombay HC had directed the state to implement orders directing it to maintain noise levels, especially during the festive season. This was after the assurance given by the CM and Shiv Sena chief that there would be some relaxations this year.