Metros   Mumbai  20 Jun 2018  Five per cent of the income to be paid to the government.
Metros, Mumbai

Five per cent of the income to be paid to the government.

However party chief failed to clarify Sena’s stand on alliance. 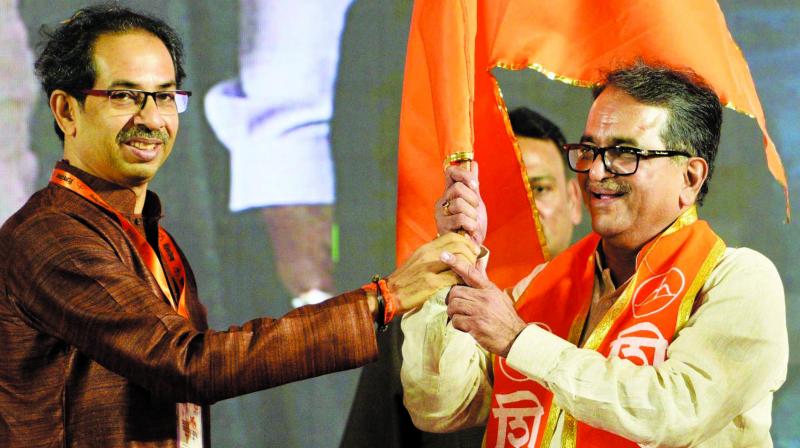 Mumbai: While addressing Shiv Sena party members on its 52nd  foundation day, Sena chief Uddhav Thackeray continued his tirade against Prime Minister Narendra Modi and Bharatiya Janata Party (BJP) President Amit Shah. Although he remained silent on BJP’s proposal to form an alliance for upcoming 2019 elections, Mr Thackeray “promised” his party workers that the next Maharashtra chief minister would be from Shiv Sena and the party would play a crucial role in the formation of the next government at the Centre.

It seems that BJP President’s recent visit to Mr Thackeray’s residence to placate him did not prove fruitful. In fact, the Sena chief went on to say that Mr Shah’s visit was an indication of Shiv Sena’s importance in national politics. He further said that Mr Modi came to power by peddling lies in 2014, but the same would not be repeated in 2019 elections.

Mr Shah had recently met with Mr Thackeray to propose an alliance for 2019 elections despite the fact that Shiv Sena declared to go solo. Referring to the same meeting Mr Thackeray claimed that now Sena is being considered on a national level and people are eager to know party’s stand which is a very good thing for the party.

Shiv Sena in its mouthpiece — Saamana’s editorial had cleared that the party will fight the upcoming elections solo and it will also be a deciding factor in the formation of the Union government. President of Shiv Sena’s youth wing — Yuva Sena, Aaditya Thackeray also ascertained the same. But Uddhav Thackeray failed to clarify whether the party will go solo in the elections. However he did assure that the party will come to power in the state.

Speaking about the Prime Minister, Mr Thackeray lashed out on Mr Modi, Devendra Fadnavis saying that they made false commitments and showed unrealistic dreams to people in the last four years since the party has been in power.

He also slammed BJP on its Jammu and Kashmir policy, the Mumbai-Ahmedabad bullet train and Nanar Green Refinery project.

Speaking on the situation in Kashmir valley, he said, “Why was BJP waiting for the death of our soldiers and residents?  And if terrorism is not related to any specific religion then why did government announce unilateral ceasefire during the month of Ramzan?”

He added, “Mr Modi may have plans to separate Mumbai from Maharashtra because he is treating Mumbai as an Ahmedabad suburb by connecting it via bullet train but Shiv Sena will not let this happen at any cost.” Shiv Sena and the residents are opposing the Nanar project due to the same reason, said Mr Thackeray.

Referring to the Mumbai-Pune Hyperloop project, he slammed Mr Fadnavis saying, “When will the project complete, we have no idea.”

Amidst all this, ex-MLA Shishir Shinde joined the Shiv Sena on Tuesday in the presence of party chief Uddhav Thackeray. Mr Shinde was in the Sena for several years during Bal Thackeray's tenure and he left the party 12 years ago. After leaving Sena, he joined the Maharashtra Navnirman Sena which he left last year.

Mr Shinde has been the face of Shiv Sena’s agitations multiple times. He grabbed the limelight after he damaging Wankhede Stadium’s pitch before an India-Pakistan cricket match was set to begin. The match was later cancelled due to the party’s opposition. While returning to the party, Mr Shinde said that he had committed a mistake by quitting the party.

Now Narendra Modi will go on Mars to make the bogus commitments as he has already visited many countries.

Why was BJP waiting for the death of our soldiers and residents?. And if terrorism is not related to any specific religion then why did government announce unilateral ceasefire during the month of Ramzan?
— Uddhav Thackeray,Shiv Sena chief