It was expected that both sides would find common ground at least on some points in this meeting on Monday. 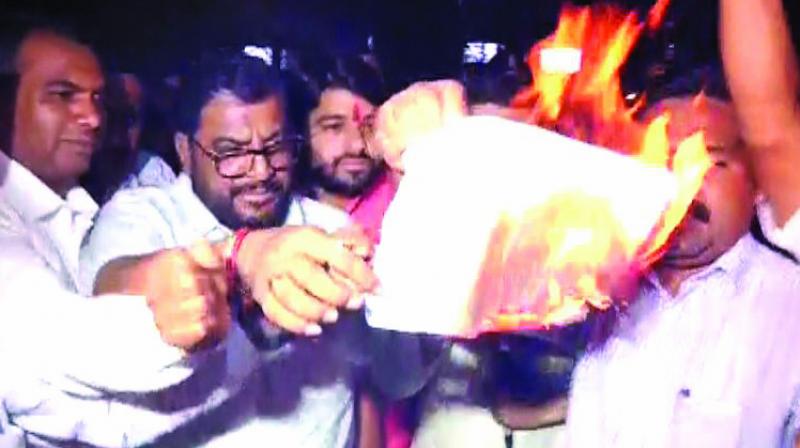 The government was unable to assure that it’d amend eligibility criteria for the loan waiver.

Mumbai: The first meeting between the high-powered ministerial committee and farmers’ representatives to decide on parameters of the announced loan waiver failed to come to any conclusion. It was expected that both sides would find common ground at least on some points in this meeting on Monday. However, they failed to reach an agreement as to who would be eligible for the proposed loan waiver. Further, the government was unable to give any categorical assurance that it would amend eligibility criteria for accessing an initial loan of Rs 10,000. Earlier, the government had been willing to tweak the conditions to make them more inclusive. Later, revenue minister Chandrakant Patil said that the government would pay farmers a loan of up to Rs 1 lakh. However, other details have not been ironed out yet. Farmer organisations later burned down copies of the government resolution (GR) about the Rs 10,000 initial loan.

The ministerial committee led by Mr Patil has been meeting political leaders and experts for discussing parameters of the loan waiver. On June 11, it was decided that five names would be given to represent farmers in finalising the parameters. There was buzz that after declaring a "loan waiver for all", the government was now trying to minimise the financial burden on the state. With the burden likely to be more than Rs 34,000 crore, the government has been doing some serious thinking on parameters for the loan waiver. For instance, farmers with four-wheelers or those who pay income tax may not get the benefit of waiver. The government is also believed to be considering excluding farmers with salaried jobs.

Meanwhile, farmers' organisations are opposing having any such parameters because of the complexity of the agricultural economy. The Monday meeting was expected to sort out such critical issues however no headway was made. There was another contentious issue before the meeting about the initial loan of Rs 10,000 to every farmer who had failed to repay his loan for consecutive years. Farmers said they had failed to get loans from banks as the latter expressed their inability to give loans. The parameters regarding the initial loan were also to be discussed however the meeting did not yield any decision.