Mhada calls its officials for questioning inconnection with allegations of bribery. 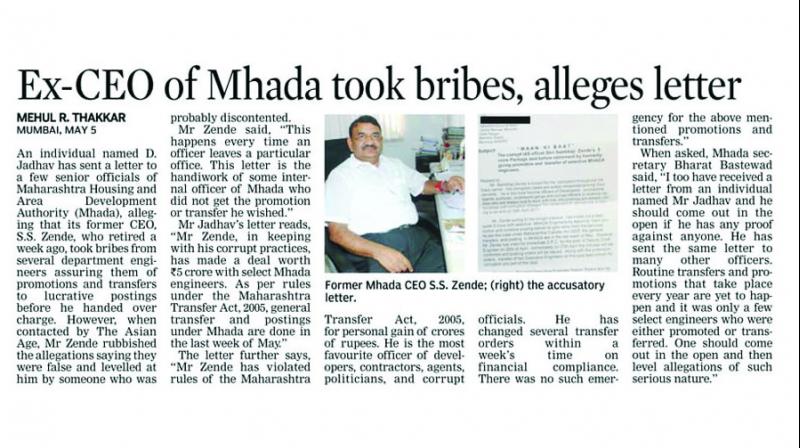 The Asian Age had reported on May 6 about a letter to a few officials of Mhada.

Mumbai: The state housing department has launched a probe into the transfer of Maharashtra Housing and Area Development Authority (Mhada) engineers who had allegedly paid bribe worth crores to former Mhada CEO S.S. Zende for plum departments.

The housing department has now called in the Mhada officials for questioning and has asked for documents related to the legality of the transfers and the allegations. The vigilance department of Mhada has also a launched a secret investigation into the allegations.

The Asian Age had reported on May 6, 2017 that an individual named D. Jadhav had sent a letter to a few senior Mhada officials, alleging that Mr Zende, who retired last month, had taken bribes from several department engineers, assuring them of promotions and transfers to lucrative departments before he handed over charge. However, Mr Zende had rubbished the allegations.

When contacted, Prakash Mehta, state housing minister, told The Asian Age, “There were some complaints about engineers being transferred by paying bribes. I am not aware of the matter and it is being looked into by the housing department.”

When contacted, Sanjay Kumar, additional chief secretary, housing department, said, “There were complaints relating to the transfers and promotions received by this office. I have called the individuals concerned in the matter for a hearing and an inquiry has been launched to find the truth. However, no stay has been ordered on the transfers yet, and we will take a final call after the inquiry is completed.”

An official from Mhada’s vigilance department, requesting anonymity said his office had received the complaint as well. “We are already conducting a secret investigation into the same. We have also questioned a few officials in regards to the allegations.” However, the official did not give more information as to who were being questioned and whether any action would be taken.

Jadhav had written to several officials stating in the letter that “Mr Zende has made a deal worth Rs 5 crore with select Mhada engineers and given them plum departments before his retirement. Mr Zende has violated rules of the Maharashtra Transfer Act, 2005, for personal gain. He changed several transfer orders within a week’s time on financial compliance. There was no such emergency for such promotions and transfers.”

Mr Zende told The Asian Age on May 5 that this happens every time an officer leaves a particular office.