The police has sought call detail records of Keswani to identify the number through which he received calls demanding money. 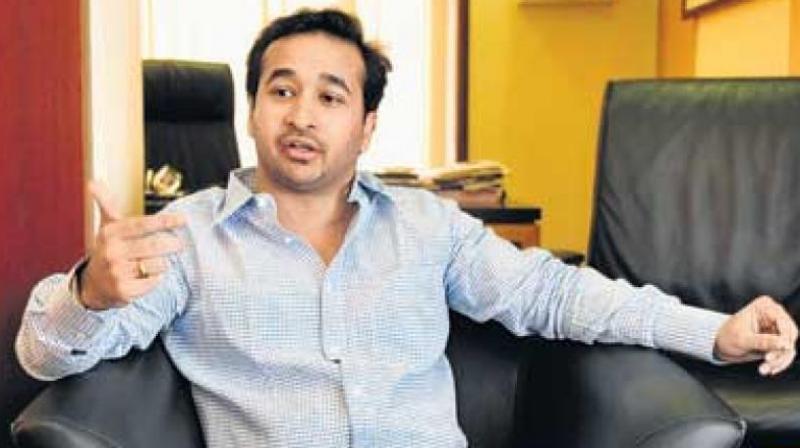 Mumbai: Politician Narayan Rane’s son Nitesh was booked for extortion on Friday after the owner of Estela restaurant approached Santa Cruz police station with a complaint about Nitesh’s men creating a ruckus and trying to shut it down forcibly.

The complainant, Hitesh Keswani, alleged that Nitesh demanded money running into several lakhs every month and that the incident occurred after Keswani refused to pay him this time. The Santa Cruz police arrested the duo — Moin Shaikh, 36, and Mohammad Illiyas Ansari, 36 — who allegedly landed at Estela at Juhu Tara Road at about 10.30pm. According to Keswani, the two men forced their way into his restaurant and began hurling abuses, after which they ransacked the place to scare the guests, later trying to force the establishment shut. The restaurateur allegedly received a phone call from Nitesh while the duo continued wreaking havoc at the restaurant.

Keswani said, “There were demands of varying amounts every month. Nitesh was not at the spot but he was on call when the incident occurred. The men created a ruckus as the money was not paid this time. Keswani however refused to quote the exact amount that was demanded.

Keswani approached Santa Cruz police station with a complaint against Nitesh on Friday. His statement was recorded and the police registered a case against two persons along with Nitesh. The police has sought call detail records of Keswani to identify the number through which he received calls demanding money.

Rashmi Karandikar, deputy commissioner and Mumbai police spokesperson, said, “We have registered a case and arrested two accused. Further investigation is underway in the incident.”

A case has been registered against the trio under sections 384 (extortion), 452 (house trespassing after preparation for hurt), 323 (voluntarily causing hurt), 504 (intentional insult with intent to provoke breach of peace), and 506 (criminal intimidation) of the Indian Penal Code.

Nitesh’s past brushes with the law

January 2017
A businessman Rohit Kandhari, 40, lodged a complaint against Nitesh, alleging that persons said to be Nitesh’s supporters, threatened him and asked him to vacate his Bandra office and hand over the keys to them. Kandhari had bought the office last year. On December 26, 2016, Kandhari received a call from his manager informing that five persons were trying to enter his office and wrongfully dispossess workers there. The Bombay high court asked police to check for merits of the complaint.

September 2010
The Powai police registered a case of attempt to murder against Nitesh after he allegedly opened fire on Shamim Chintu Shaikh in his office. The investigation was handed over to the CBI, which filed a closure report after Shaikh took back his complaint. Shaikh had claimed that Rane shot at him twice at Swabhiman Sanghatana’s office in Khar and one of the bullets grazed his cheek.