Metros   Mumbai  20 May 2017  Decision on Byculla zoo fee hike to be taken next week
Metros, Mumbai

Decision on Byculla zoo fee hike to be taken next week

Since all parties, except Shiv Sena, are opposing the entry fee hike, the meeting could have had an interesting session. 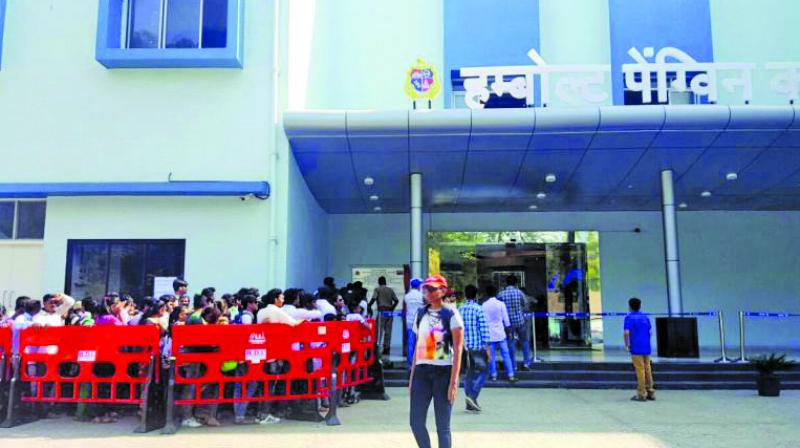 Thousands of visitors visit Byculla Zoo to take a look at Humboldt Penguins.

Mumbai: Brihanmumbai Municipal Corporation’s (BMC) standing committee adjourned its meeting on Friday, held to decide if Mumbai will pay Rs 5 or Rs 100 as entry free to Veermata Jijabai Bhosale Udyan and Zoo or Byculla Zoo, to next Friday. The meeting was adjourned to pay homage to union environment minister Anil Dave who passed away on Thursday.

Since all parties, except Shiv Sena, are opposing the entry fee hike, the meeting could have had an interesting session. The proposed hike for the zoo had launched a new political battle between the Sena and Bharatiya Janata Party (BJP), as the latter has been opposing the fee hike, while Sena wants the proposal to be sanctioned. Given BJP’s opposition on the hike, parties like Congress, MNS, Samajwadi Party and even NCP are opposing the proposal. The standing committee was expected to take a decision on the increase on Friday.

Other parties’ members believe that the proposal has been made to compensate for the expenditure borne by the civic body for Humboldt Penguin project. The civic body has spent Rs 40 crore on the project. Mumbai BJP president, Ashish Shelar, too, in the previous week had tweeted against the hike, assuring that BJP corporators will oppose the proposal in standing committee.

Apart from the hike, it was also decided that evening walkers, too, would be allowed only from morning 6 am to 8 am for which they will have to pay Rs 150 per month as against the current fee of Rs 30 per month. Due to this, citizen groups have been opposing the hike too as they believe that the increasing entry fees for joggers would not allow the poor population to enter the garden’s open spaces.