More to switch from other parties: Devendra Fadnavis

Mr Fadnavis on Tuesday inaugurated the party’s media cell for the general election. 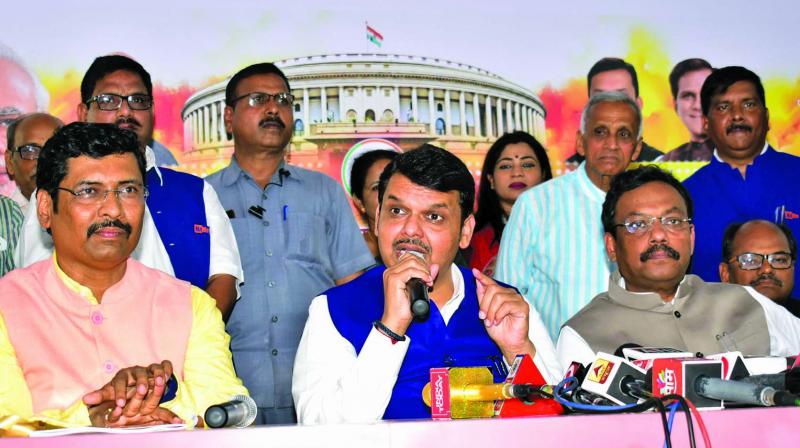 Mumbai: Chief minister Devendra Fadnavis has indicated that more people from other parties will join the Bharatiya Janata Party in the coming days. “Aage aage dekho hota hai kya,” (see what happens in coming days)” he said when asked about the possible entry of leaders of other parties.

Nationalist Congress Party (NCP) leader and son of former chief minister Vijaysinh Mohite-Patil, Ranjitsinh Mohite-Patil on Tuesday announced that he would be joining the BJP. He is likely to be given a ticket from the Madha seat, from where NCP chief Sharad Pawar had announced his candidature and later withdrew. Mr Mohite-Patil will be inducted in the BJP in a function organised at Garware club in Mumbai on Wednesday.

Mr Fadnavis on Tuesday inaugurated the party’s media cell for the general election. At the event, he said that Republican Party of India (RPI) chief Ramdas Athawale was demanding one seat from the party, which they won’t be able to give the seat due to some reason.

“We will accommodate him in the Assembly election. Mr Athawale is with us and he will remain present in a rally on March 24 with us,” Mr Fadnavis said while replying a question over Mr Athawale’s discontentment. The BJP leader also said that the party would do much better than the previous Lok Sabha elections and register a record. Prime Minister Narendra Modi waive is bigger than the 2014 election, he claimed.

Speaking to The Asian Age, NCP leader Vijaysinh Mohite-Patil said that he supports his son Ranjitsinh, who will join the BJP.

The move of Ranjitsinh is another jolt to the Opposition parties as Sujay Vikhe-Patil; son of the Congress leader Radhakrishna Vikhe-Patil had joined the BJP in last week.

Sources said that Ranjitsinh had held a late-night meeting with Mr Fadnavis’s close associate and water resources minister Girish Mahajan on Monday. Later on Tuesday, Ranjitsinh called a meeting of party workers and his supporters at his residence at Akluj in Solapur and announced his decision to join BJP. Uday Pratap Singh, senior Mumbai NCP leader and close aide of Vijaysinh will also join the BJP.

Till date, the NCP has not announced its candidate for the controversial Ahmednagar and Madha seats.