Dadoji Konddev Stadium is the only one in Thane that had 400-m running and athletic track. 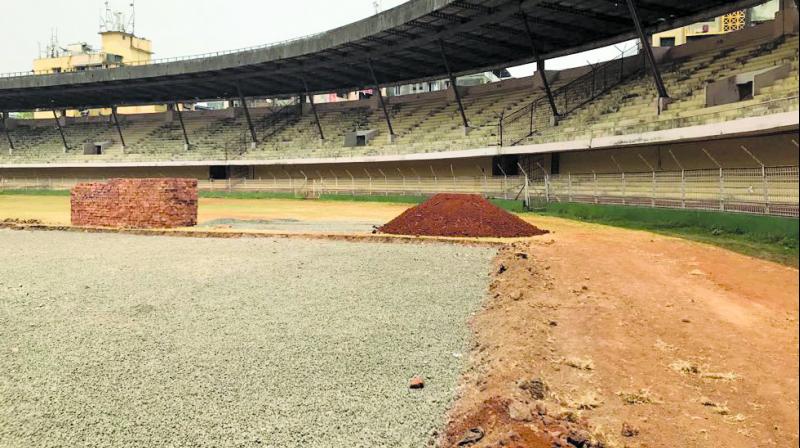 The TMC dug up a section to convert it into a cricket pitch.

Mumbai: Thane-based sports enthusiasts are unhappy over the redevelopment of the Dadoji Konddev Stadium into a ‘cricket-only’ stadium by the Thane Municipal Corporation (TMC).

According to the corporation, this ground will henceforth be used to prepare budding cricketers for the Ranji Trophy, a domestic cricket championship.

When The Asian Age visited the stadium, it found that the TMC had dug up the section where athletes had a 400-metre running track and specially designed ground for long jump and shot-put. These sections of the ground have now been converted to a cricket pitches for cricketers.

“My daughter, Eva Manoj, for the last three years had been practicing on this track every day. This stadium was originally made for both cricket and athletics, yet renovation plan is poised to convert it into a Ranji stadium and they have already dug up the athletic track, making the ground useless for my daughter and others like her,” said Manoj Chacko, a resident.

Dadoji Konddev Stadium is the only one in Thane that had 400-m running and athletic track.

Shakil Ahmed (48), the parent of an 11-year-old boy who is into athletics, said, “There was a good understanding between athletes and cricketers, hence there wasn’t any kind of dispute. While the athletes practiced from 6.30 to 8.30 am and 5.30 to 7.30 pm, the rest of the time was reserved for the cricketers. Then a couple of days ago the corporation started digging the ground. Now the sections where our kids practiced is destroyed,” Mr Ahmed said.

Around 500 to 600 athletes practise here regularly and have created an online petition to bring attention to the matter.

“Every sport is equal. The corporation should give special preferences to the cricket and sideline other sports in this manner. By doing such things, the TMC is demotivating students who are really doing well in sports,” said another parent.

Despite several attempts to contact TMC sports officer Minal Palande, she remained unavailable for comment at the time of going to press.