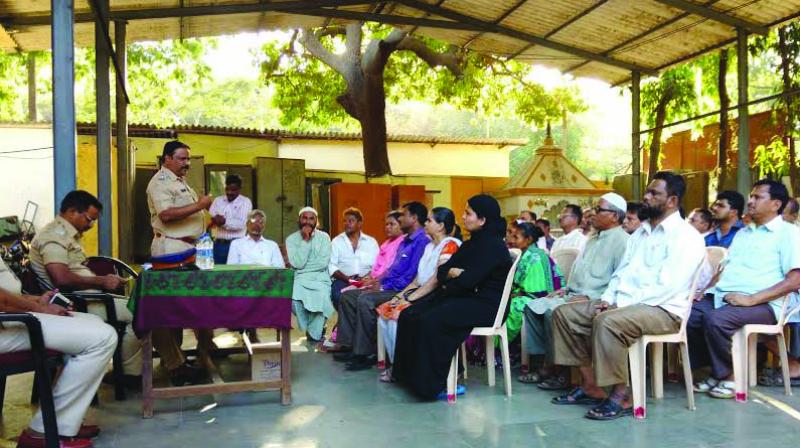 Mumbai: The Trombay police arrested 17 persons, including All India Majlis-e-Ittehadul Muslimeen (AIMIM) corporator Shahnawaz Hussain, after a riot broke out in Cheeta Camp area late on Saturday night over a derogatory post on a social networking site by a 19-year-old local, Arvind Dudhiya, a sweeper with the Navi Mumbai Municipal Corporation. The police had arrested Dudhiya but the rioters allegedly wanted the police to hand him over to them. The rioters pelted stones at two police vehicles and the police station, causing damage to the windowpanes, and torched a police van. The police station asked for reinforcements, and they had to resort to firing rubber bullets and teargas shells, and a baton charge. More arrests are likely in the case.

The incident began after Dudhiya uploaded the  picture on his profile. Some of his friends asked him to delete it, however, Dudhiya refused, the police said. Fearing a backlash later, Dudhiya allegedly phoned Hussain to apologise.

“Dudhiya claimed he told Hussain he had made a mistake, however, the latter asked him his location and Dudhiya told him he was at his home. Soon, a group of men landed at his residence and Dudhiya went into hiding at his relative’s residence. A police team brought him to the station,” said Shahji Umap, deputy commissioner of police (Zone VI).

The police filed a case against Dudhiya around 11 pm and the people who were demanding that action be taken against him left. The officials were, however, stunned after a 150-strong mob shouting slogans came to the police station around 12.45 am and started pelting stones.

“They torched a police van and vandalised two other police vehicles. They were hurling balls of cloth that were set afire and paverblocks at policemen, which left 15 personnel injured. The situation was brought under control after 45 minutes,” said Mr Umap.

The police fired several rubber bullets, which hit two children, identified as Usman Shaikh (15) and Mohammad Ayub Chaudary (17). While Shaikh was hit on his waist, Chaudary sustained injury on his leg.

Chaudary’s father Bashir told The Asian Age his son had landed at the spot to check why the mob had gathered there. “A friend told him there was a commotion near the police station. He went there to check what was happening and was hit by a rubber bullet as soon as he reached there. The police has detained my son,” Bashir said.

The police is verifying the roles of Shaikh and Chaudary. Most of the arrested persons are AIMIM supporters, officials said, adding, they were learning if they were instigated by Hussain.

Dudhiya has been booked  under the Information Technology Act. Another case has been registered against the rioters under Sections 307 (attempt to murder), 435 (mischief by fire or explosive substance with intent to cause damage), 353 (assault or criminal force to deter public servant from discharge of his duty), 332 (voluntarily causing hurt to deter public servant from his duty) and 148 (rioting, armed with deadly weapon) of the IPC with sections of the Criminal Law Amendment Act and Damage to Public Property Act.