Eat beef if you want, why celebrate it? VP

Venkaiah Naidu says freedom of speech needs some regulation to protect the rights of others. 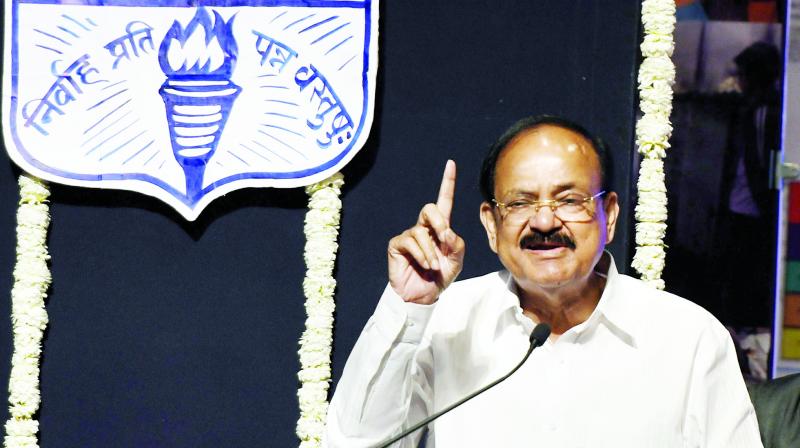 Mumbai: Vice-President M. Venkaiah Naidu on Monday ruffled many a feathers after he raised the issues of ‘beef ban’ and ‘kissing’ in the country, saying one can eat beef or kiss if he or she wants, but why have an extravaganza and festival for the same.

“You want to eat beef, then eat. Why Festival? Similarly, a ‘Kiss Festival’, if you wish to kiss why do you need a festival or anyone’s permission for it,” Mr Naidu said, while addressing at the platinum jubilee celebration of Matunga-based R.A Podar College of Comme-rce and Economics on Monday.

Mr Naidu also spoke about issue on freedom of speech. According to the VP, freedom of speech also needs some regulation to protect the rights of others. He said that of the 700-odd universities in the country, only ‘few have problems’. “Dissent is agreeable, but disintegration cannot be allowed. This should be understood by one and all,” he said, while referring to the recent slogans advocating India’s disintegration which were allegedly shouted by some students at the Jawarharlal Nehru University (JNU), Delhi.

Mr Naidu added, “The talk of disintegration came in the backdrop of one of our neighbours aiding, abetting, funding and training terrorists and sending (them) here.”

Taking about the ‘beef festival’ organised by some students of IIT-Madras in 2017, Mr Naidu said, “If you want to eat, you can eat but why organise a festival in the college and hurt the sentiments of others?” Mr Naidu said.

In the past too Mr Naidu had addressed the beef issue where he stressed on how food is an individual’s choice and that he is a non-vegetarian and nobody told him what to eat.

Mr Naidu said that social discrimination in India is based on caste and gender. “We have created these artificial barriers. Caste had come (into being) on account of professions. Now, the professions are changing. People are becoming knowledgeable and doing businesses, which were not done earlier.”