The Kurla police has registered a case against unknown persons. 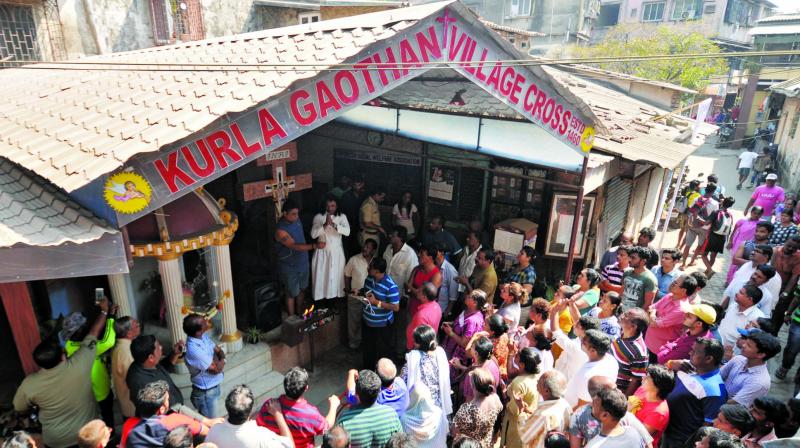 Mumbai: Unidentified miscreants vandalised a statue of Mother Mary installed near Kurla junction around 4 am on Sunday. The miscreants, who were allegedly on a bike, shattered the glass of the case and managed to break the statue. The Kurla police has registered a case against unknown persons. The police is sifting through CCTV footage procured from units located near the spot.

Local residents who protested at the spot after the incident alleged that such incidents take place especially during election time and the police should take strict action.

Nicholas Almeida, a social activist, alleged that many such incidents had happened in the recent past. “In January -end, a cross in Juhu was broken and the police nabbed a drunken, mentally -challenged person. Last year in Santa Cruz, another cross was vandalised on the day of Mother Teresa’s canonisation. No arrest was made in that case,” Mr Almeida said.

According to Kurla police sources, the incident occurred at about 4 am at Christian gaon, Kurla (west) where the statue was installed. “We received a complaint that a statue of Mother Mary was vandalised and the glass casing on another statue was shattered,” said a police source.  The source added that many residents after waking up saw the same and with the help of social activists gathered at the venue to protest.

“The situation was controlled and we have started investigations,” said Paramjit Dahiya, deputy commissioner of police, zone 5.

When contacted, the Kurla police revealed that they had started scanning CCTV footage of the area and have found some bikers roaming around in the area. “The bikers are wearing helmets but there is no CCTV footage recording the incident. So we have registered an offence against unknown persons and are investigating the case,” a police officer said.