The resident also asserted that earlier the floodlights were kept on till late hours of night during wedding functions. 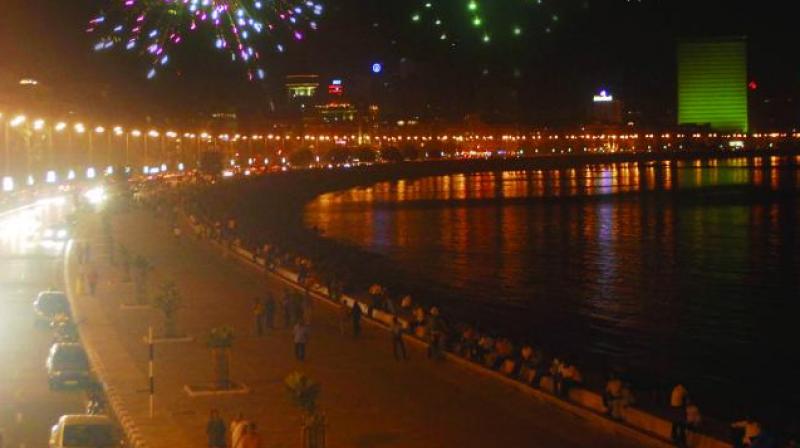 Mumbai: High intensity LED lights at gymkhanas along the Marine Drive that are directed towards the road are potentially dangerous to traffic, say light-pollution activists. In an attempt to bring the civic authorities’ attention to the issue, NGO Awaaz Foundation along with Nilesh Desai, a resident living next to the Wilson Gymkhana, measured light levels in unit of lux, facing the installed lights and on the seaward side of Marine Drive. While the light levels recorded at Wilson Gymkhana 84,800 lux, there was an appallingly huge difference when facing the light, and in the surrounding areas. The ambient light levels at the Marine Drive were recorded 21,000 lux.

“Such differences create distraction to drivers and are a cause of concern for their safety, apart from being a health hazard to those living in surrounding areas. When exposed to such conditions for longer time, it could also lead to sleep disruptions, constant headaches and change in hormones,” said Sumaira Abdulali, Founder of Awaaz Foundation. The light levels at Police Gymkhana were recorded 14,100 lux.

Residents of Sunkerseth Building, near Wilson College have been struggling with the bright floodlights flashing towards their buildings since last two years. “I wonder if there is any kind of impact study carried out while installing such lights in the vicinity of a residential areas. They are extremely bright and blinding, it is hard to even see out of balcony due to the higher lux levels,” said Nilesh Desai.

The resident also asserted that earlier the floodlights were kept on till late hours of night during wedding functions. However, following the complaints by residents, the district collector has issued notice to Gymkhanas to shut the lights by 10 pm. In a recent hearing of the residents’ grievances by the collector office, Wilson Gymkhana was also directed to change the direction of flood lights.The district collector has also written to the state government to lay down a policy for urban lighting.