Eye on 100 hotheads by cops

Karni Sena has been asking the public to observe ‘janta curfew’. 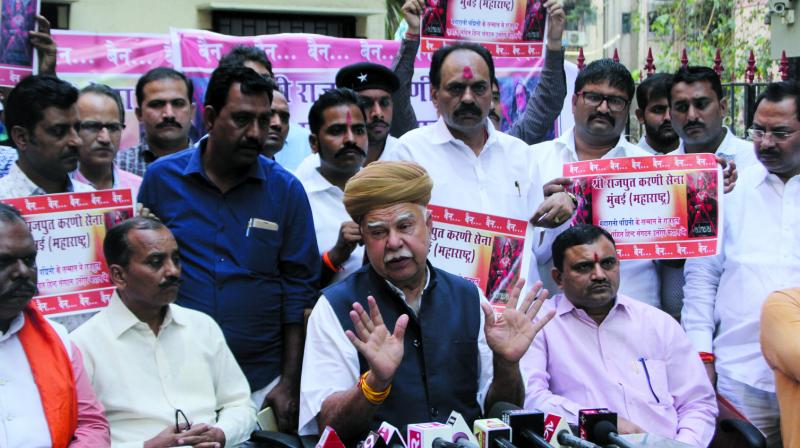 Mumbai: Around 100 supporters of organisations that have been protesting against the controversy-stricken film Padmaavat, which is scheduled to release on January 25, have come under the Mumbai police's scanner.

The police said it would comply with the orders of the Supreme Court, which set aside the notification issued by the states of Madhya Pradesh, Haryana, Rajasthan and Gujarat against the film's release, and take action against those who try to create a disruption in city theatres. Till now, no preventive arrest has been made.

The Rajput Karni Sena has been appealing the public to observe a 'janta curfew' on the day the film releases. Recently, more than 100 supporters of the pro-Rajput outfit Karni Sena were detained for protesting outside the Central Board Of Film Certification (CBFC) office in south Mumbai.

Deepak Deoraj, deputy commissioner of police (operations) and Mumbai police spokesperson said, "We have not zeroed down on any plan for the pre-release of Padmaavat, but we are going to comply with the honourable court orders and act accordingly." Mr Deoraj added, "We have not received any application asking for protection for the filmmakers or actors."

On January 12, the Mumbai police detained 132 members of the Rajput Karni Sena for protesting outside the CBFC office and Haji Ali against the clearance given to the film, which was earlier titled Padmavati. The outfit had demanded a ban on the film. Opposing the CBFC's decision to release the film, a Karni Sena leader had said, "Merely changing the name of the film isn't enough. The CBFC, which has been running ever since the time of the British Raj doesn't know how to work."

Speaking out against banning the historical epic, Advocate Abha Singh said, "It is completely insane to ban a movie without knowing what content it might hold, and forcing the makers of the film to incur losses. However, the police should stand by the filmmakers, and condemn any action whatsoever by any party wanting to ban the movie."