Rakesh wanted to take Sonali to Gujarat, but she didn’t want to shift. 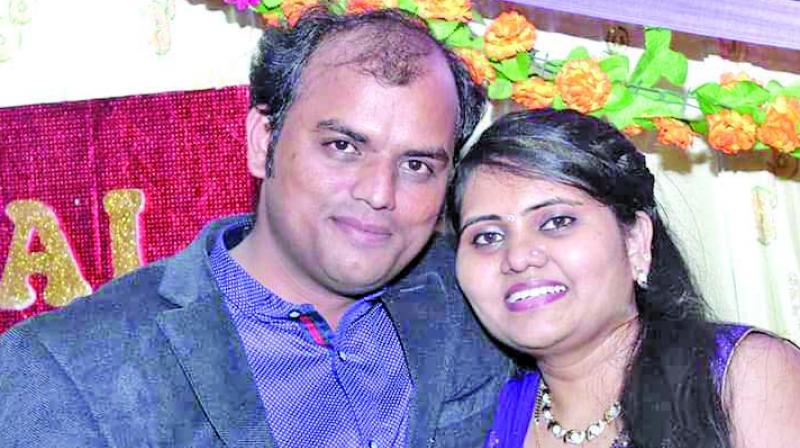 Pune: A 34-year-old Pune-based software professional, who was being treated for infertility, allegedly smothered his 31-year-old engineer wife to death with a pillow on Wednesday, after he found out that she had discussed his medical history with her friends and relatives on social media sites, said the police. After killing his wife, Sonali Gangurde (31), the accused techie, Rakesh, hanged himself from a ceiling fan.

The couple used to quarrel about sharing each other’s personal details, said the police, who found a suicide note from the deceased’s apartment. P.S. Londhe, assistant police inspector, Hadapsar, said, “We found a suicide note that Rakesh had left behind, which says that Sonali used to share their personal chat information, and details about the treatment they were going through for having children, with friends and relatives on WhatsApp and Facebook. Rakesh was upset with Sonali over this and that is why he killed her before committing suicide.”

Mr Londhe added, “We have registered an FIR against Rakesh for murdering his wife. Meanwhile, a post-mortem report confirmed that Sonali was killed because of being smothered and that Rakesh had hanged himself. Hence, there is no other person involved in the crime.” The couple stayed at Shiv Park, Manjari Farm Road, Hadapsar, Pune.

Rakesh, a BSc graduate in computer studies and an MBA, was working with a chemicals company in Pune, while Sonali, who had an engineering degree, was a homemaker. They were married in Nashik four years ago and had been staying at Hadapsar for three years. They did not have a child and both of them were undergoing treatment to be able to conceive. Sonali’s two brothers, Harshal and Kunal, stay elsewhere in Pune.

Harshal, who registered a complaint in Hadapsar police station regarding his sister’s murder, said that he received a call from his mother from Nashik on Wednesday afternoon about Sonali not picking up her calls. Harshal, along with Kunal, who stays with him, and two of their cousins Pradnyawant and Amol Dewalekar, then went to Sonali’s house in Hadapsar. But nobody opened the door despite the bell being rung. They later tried opening the door with duplicate keys kept with the security guard, but failed.

Harshal and his brothers thus contacted the Hadapsar police station. Cops arrived at the flat and broke open the door, only to find Sonali lying dead in her bedroom and Rakesh hanging from a ceiling fan.

Meanwhile, it was revealed that Rakesh had left his job in the chemicals company in Pune and had joined another firm in Gujarat a month ago. He had come to Pune a week ago to take Sonali to Gujarat, but she did not want to shift there. The police suspects that this, too, could have been a reason behind the murder.

The deceased couple’s neighbours expressed shock about the incident. “We have hardly seen the couple and they never mingled with anybody in the society. Though they have been living here for more than three years, they would stay in Nashik half the time,” said one of the neighbours.