Ansari was lodged at Mardan jail in Lahore and was handed over to Indian officials at the Wagah border. 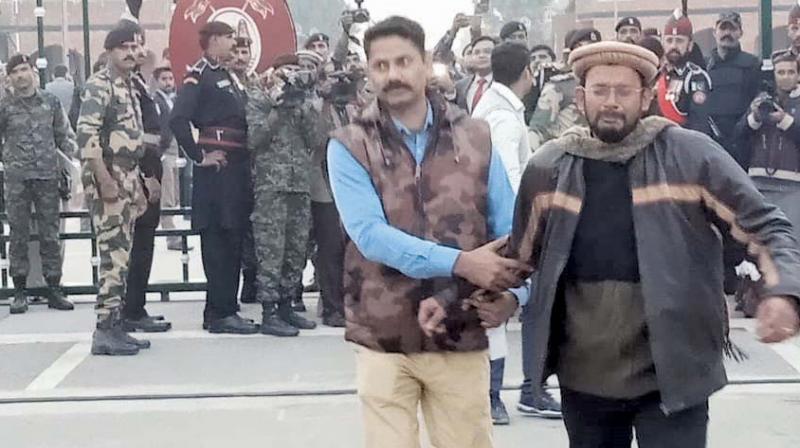 Ansari is released from Pakistan via the Wagah border.

Mumbai: Tears of joy rolled down the cheeks of Hamid Nehal Ansari’s parents when their son entered India via the Wagah-Attari border Tuesday afternoon. Ansari (33) had travelled all the way from Lahore to the Wagah border, his parents eagerly waiting to see him after six long years. Ansari was released from Peshawar jail on Monday.

Ansari’s mother Mrs Fauzia carried Kit-Kat chocolates as her son loves them. His father was in pleasant shock hearing about his son’s return. When Ansari set foot on Indian soil, his mother hugged him and the mother-son duo cried for quite some time.

After spending six years in confinement in Pakis-tan, Ansari, an engineer from Mumbai, was repatriated. All thanks to the eff-orts of journalist-activist Jatin Desai who made it his mission to get Ansari back.

Ansari was lodged at Mardan jail in Lahore and was handed over to Indian officials at the Wagah border in the evening. Desai, general secretary of the Pakistan-India Peoples’ Forum for Peace and Democracy (PIPFPD), started the conversation for setting up a peaceful connection between the Press Club of Mumbai and its counterpart in Karachi. Desai was with Ansari’s parents to get him back to the city.

Mrs Desai said, “It’s a great moment. The parents are crying tears of joy and we are expecting to be in Mumbai on Wednesday. We are at Wagah since afternoon and were happy to see Ansari.”

Ansari was arrested in 2012 for illegally entering Pakistan from Afghanistan reportedly to meet a girl he had befriended online. Later, he was convicted by a field general court martial on charges of espionage and anti-state activities on Dec 15, 2015. He was sentenced to three years’ imprisonment. He denied the charges and claimed that he had visited Pakistan to help a female Facebook friend in Kohat as she was in trouble.

For Ansari’s kin, the software engineer’s return to India after six years was nothing short of Bakri Eid festivities. “This is a big day for us and the family is going to celebrate his return to the motherland. Our family is very much happy on his arrival and we are grateful to Allah for bringing him back in our midst,” said Ansari’s cousin, Zia Ur Rahman.