Metro to be extended to Virar and Dombivali: CM Devendra Fadnavis

The Prime Minister said that Metro has found to be an effective tool for providing good transport connectivity. 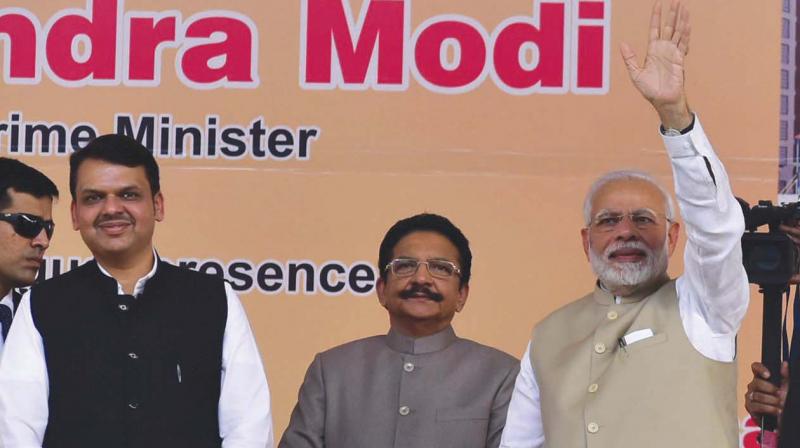 Prime Minister Narendra Modi on Tuesday laid the foundation stone for the Metro 5 and Metro-9 at Kalyan in Thane district. (Photo: Debasish Dey)

Mumbai: In a boost to lakhs of commuters living in Dombivali and Vasai-Virar, they will soon be connected to Metro services. Chief minister Devendra Fadnavis on Tuesday formally announced that Thane-Bhiwandi-Kalyan and Dahisar East-Mira Bhayandar Metro corridors would be extended up to Dombivali-Taloja and Vasai-Virar respectively.

“The state government will soon prepare the DPR (Detailed Project Report) of both these projects and also sanction them,” said Mr Fadnavis. He was speaking at a foundation stone laying ceremony of MMRDA’s two Metro projects – Metro-5 and Metro-9 – at Phadke Maidan, Kalyan. Prime minister Narendra Modi laid the foundation stone of both the projects on the occasion. In addition to this, he also launched CIDCO’s mass housing schemes for economically weaker section and lower income group sections in Navi Mumbai.

Mr Fadnavis was respo-nding to a demand made by Ravindra Chavan, the BJP MLA from Dombivali, who said that the Thane-Bhiwandi-Kalyan Metro should be connected to Dombivali to ensure better transport connectivity.

The CM said, “People living in Thane-Bhiwa-ndi-Kalyan had dreamt of having their own Metro. With the Metro-5 project, Bhiwandi will now be directly connected to Mumbai. The Metro projects would be helpful for integrated connectivity to Mumbai.”

The Prime Minister said that Metro has found to be an effective tool for providing good transport connectivity. Since last four years, we have implemented several projects to expand the Metro network in Mum-bai. In next three years, the Metro network in the city would be further extended by 35 kms, he said.

He also took a dig at the Congress for the ‘delay’ in implementation of Me-tro projects. “The Metro project started in Mum-bai in the year 2006. How-ever, in the next eight years only one Metro line, that too of just 11 kms, was completed by 2014. On the contrary, we intend to expand the Metro network by 275 kms in the state in near future,” said Mr Modi.