Around Eight Bodies recovered from ‘illegal loft’ in shop

A Brihanmumbai Municipal Corporation (BMC) official revealed that the entire land falls under a ‘No Development Zone’ as per the 1991 DP. 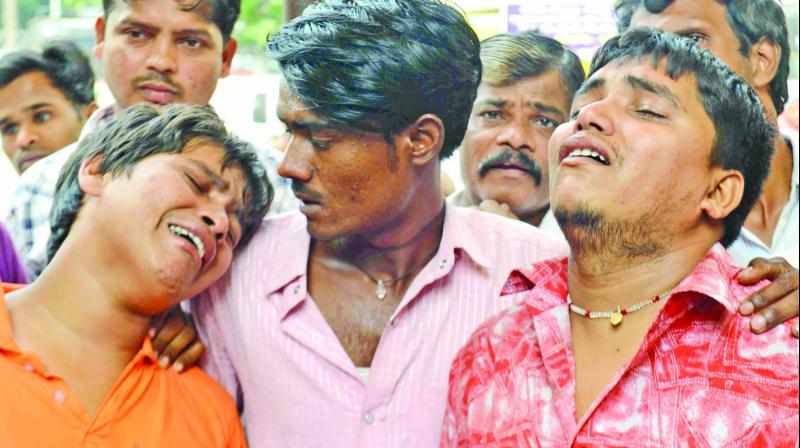 The relative of deceased Ramnaresh Gupta unable to come to terms with their loss. (Photo: Rajesh Jadhav)

Mumbai: During the fire-dousing operations in a shop at Saki Naka, an “illegal” loft was found where the victims were sleeping. The fire brigade team could not trace the bodies initially, but later seven to eight charred bodies were recovered from the loft.  Four other bodies were found on the ground floor.

A Brihanmumbai Municipal Corporation (BMC) official revealed that the entire land falls under a ‘No Development Zone’ as per the 1991 DP. However, since 1975, the area has been declared as a slum, following which small-scale industries along with residential structures mushroomed in the area.

“As per the findings of the fire department, the bodies were recovered from a loft during the fire-dousing operations. The owner did not seek any permission from the BMC for building the loft, so it is illegal,” said Ajit Kumar Ambi, assistant municipal commissioner of L-ward (Kurla).

The compound in which the shop was constructed belongs to the Makaharia family who had leased the land to Jayesh Valji Bhanushali for running a snack shop in 2016. The police has arrested the shop owner Bhanushali for questioning. Meanwhile, there are several complications in the land-use of the entire area on Khairani road.

“The land where all these small-scale industries have been set up is a No Development Zone as per the 1991 Development Plan (DP) which hasn’t been implemented yet. I don’t know what is its status in the current DP plan. The industries and slums are getting political support which is why they are mushrooming in large numbers,” said a civic official.