Team of 50 engineers were present on site. 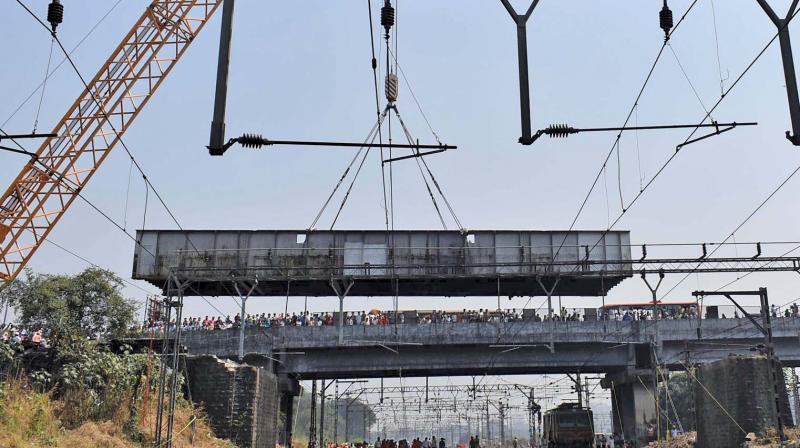 The two-lane bridge was torn into two using cranes after disconnecting the overhead wires located below the structure. The bridge had two 27-metre-long steel spans weighing approximately 60 tonnes.

Mumbai: The 104-year-old, British-made Patripul Bridge in Kalyan was dismantled on Sunday. The dismantling work had started six days ago, but, since it is located above the railway tracks at Kalyan, the Central Railway (CR) decided to complete the work during mega-block hours, as Sunday is a holiday for the working population.

The two-lane bridge was torn into two using cranes after disconnecting the overhead wires located below the structure. The bridge had two 27-metre-long steel spans weighing approximately 60 tonnes.

Two crawler cranes of 600-tonne and 400-tonne capacity were used to remove the spans. A team of 250-300 persons including 50 engineers, 200 workers and RPF personnel were present during the dismantling of the bridge.

Most of the work was completed by 2 pm, and CR resumed all services, including long-distance ones, by 3.30 pm. Railway workers used train eng-ines to reconnect overhead wires to resume services.

The Kalyan-Dombivali Municipal Transport (KDMT) and Maharash-tra State Road Develo-pment Corporation (MSRDC) ran special additional buses to and from Kalyan-Dombivali and Pune-Nashik respectively to compensate for the cancellation of train services. Though the traffic police was deployed on special duty in light of the operation, the adjacent, two-lane Tisai Bridge saw a heavy traffic jam with a high number of vehicles, including KDMT buses, concentrated towards Kalyan-station direction. Similarly, after resuming railway services, most trains from and to Kalyan were fully packed.

“Today (Sunday), all we did was pick the bridge and keep in both sides (as it was ripped into half). The original work had begun six days ago where the workers successfully removed all components from the bridge. However, we could not proceed because the spot is a busy area for both roadways and railways. Hence, we decided to wait till Sunday and eventually did it quickly without anything going awry,” an official said. Two crawler cranes were present at both the ends of the bridge, which pick-ed the sides and laid it on the open space adjoining the bridge area.

According to railway officials, both Railways and state government approved the design for the new bridge, and the MSRDC will begin work for the same within a couple of days.

“The MSRDC is ready with the blueprint of the new bridge, but it had been waiting for this bri-dge to be dismantled. Now it should kick-start the work as soon as the Patripul debris is cleared. It submitted the blueprint to the state and us, and it was accepted,” a railway spokesperson said.