INS Chennai to be commissioned on November 21

The indigenously designed ship has state-of-the-art weapons and sensors, and stealth features. 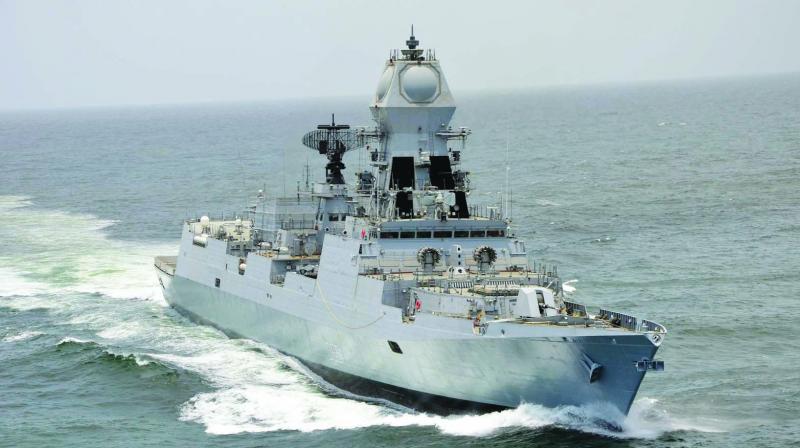 Mumbai: The Mazgaon Dock Shipbuilders Limited (MDL)-built INS Chennai (D65), which is the third ship of the Kolkata-class destroyer, will get commissioned on November 21 in the Indian Navy. The ship is the first one to have a specially-integrated underwater ‘Kavach’ decoy system that changes the direction of a missile or a torpedo fired at it by an enemy ship.

According to Navy officials, INS Chennai has a mechanism via which, even when there’s danger, all the crew can be kept in loop with the integration system. The indigenously designed ship has state-of-the-art weapons and sensors, and stealth features.

Vice-Admiral Girish Luthra, Flag Officer Commanding-in-Chief of the Western Naval Command, told The Asian Age while aboard the ‘Helo deck’ of the ship that the ship is around 60 per cent indigenous. “Commissioning of INS Chennai marks the completion of Project 15A, indigenously designed and constructed Kolkata-class guided missile destroyers, built by Mazagaon Dock Shipbuilders Limited (MDL), Mumbai.”

Officials added that her float components are 82 per cent, machinery is 52 per cent and weapon censors are 35- to 45-per cent indigenised.

The ship has an overall length of 164 meters and displacement of over 7,500 tons. Along with that, she is equipped with Heavyweight Torpedo Tube Launchers, Rocket Launchers and Towed Arrau sonar capability. She can achieve a top speed of over 30 knots (approximately 55 kilometres per hour).  She is also having a combat management system, which provides network centric capacity to the ship to keep every staff of ship in loop and with this combat capacity the ship can keep a larger area under surveillance in compare to other ships, informed that navigation officers of INS Chennai. As many as 350 to 400 people will remain present on the ship.

Flag officer vice admiral Luthra informed that the Kolkata class (Project 15A) are a class of stealth-guided missile destroyers constructed for the Indian Navy. He said, “INS Kolkata, the first ship of the class, was commissioned on August 16, 2014 and INS Kochi, the second ship of the class, was commissioned last year on September 30, and now Chennai is getting commissioned on November 21 this year. The whole cost of the Kolkata-class project is Rs 11,500 Crore.” Now, in the next leg, is the Visakhapatnam class (Project 15B), which is a class of stealth guided missile destroyers. The first ship of this class will get delivered in 2018, informed Mr Luthra.