Says to understand the essence of a language, read poetry in that language. 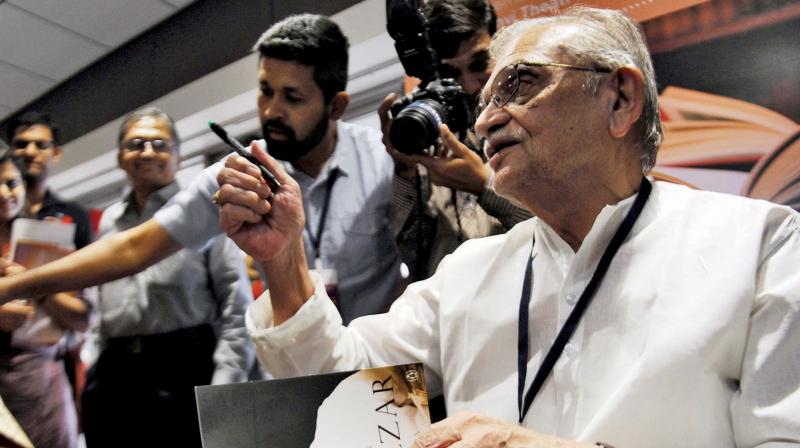 Bollywood lyricist Gulzar during his felicitation during an event organised at NCPA on Friday in Mumbai. (Photo: Rajesh Jadhav)

Mumbai: Following Bob Dylan’s Nobel prize for literature, the whole world might be debating over whether songwriters could be poets, but closer home, the reconciliation seemed much smoother and easier as Gulzar was given the Poet Laureate award at the Tata Lit Fest. A regular at the festival, he was welcomed into a packed Experimental Theatre on Friday and also read out poems from his soon to be published collection of poems translated by diplomat and columnist Pavan Varma, titled Neglected Poems. Referring to translations of his work by Mr Varma, Gulzar quipped, “He is the one who removes the creases from my clothes.”

Responding to the comment, Mr Varma replied, “His true magic is in transforming complex thoughts into chiselled sharp imageries — a true characteristic of a poet. In fact, if Dylan could win a Nobel, so could Gulzar saab.”

Festival director Anil Dharker, an admirer of Gulzar’s works, said, “Gulzar saab has enthralled generations of readers, be it in popular culture or in literary circles. His scripts, poems, songs, novels and translation have added so much to our literature. In fact, it’s an honour for us.”

To which the poet asked humbly whether he was not asking for too much.

Mr Varma has also been closely associated with the poet laureate and translated his work into English.

Speaking on the essence of poetry, Gulzar said, “No matter what one says, I feel that if you have to really understand the essence of a language, you must read the poetry in that language. In India, we have so many languages. To know each in its entirety, you have to read poems in these different languages. Only then can one know the multifaceted beauty that India is.”

The legendary poet was all praises for renowned Maharashtrian bilingual poet, the late Arun Kolatkar. “He is someone whom I wanted to meet, but never got the opportunity. Today I have a photo of Kolatkar on my table, which a friend of mine had got me after he learnt about my admiration for him.”