Meanwhile, the malayali organizations have decided to cancel the week long Onam celebrations, and send the money to relief fund. 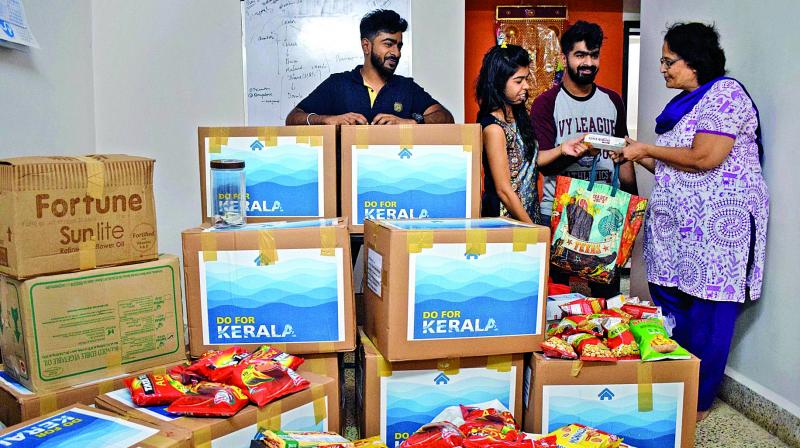 Mumbai: Several Non-Government Organizations (NGOs) and Malayali associations across the city have come forward to supply goods and eatables to Kerala. Since past three days, non-perishable goods are been supplied via trucks and ships. In addition to this, Onam celebrations across the Mumbai Metropolitan Region (MMR) have been called off and the funds for the celebrations have been donated to the Chief Minister’s Disaster Relief Fund.

The NGOs like ‘The Food Army’ has started collecting resources like rice, lentils, sugar, milk powder packets, etc. The NGO has organized collection centres across the city wherein mumbaikars can drop in the food packets. “The collection will be continued till Monday, and it will be sent to Bangalore through airways. We have contacted youth NGO in Bangalore who will further take these packets till Wayanad, Kerala,” said Rintu Rathod. Meanwhile, Muse, a Thane-based NGO has also started collecting necessary items for the relief of the victims. Through 11 collection centres across Mumbai, Navi Mumbai and Thane, the volunteers are collecting necessities like blankets, sanitary napkins, bed sheets, oil, soaps etc. that would be sent through train.

Meanwhile, the malayali organizations have decided to cancel the week long Onam celebrations, and send the money to relief fund. “We have already sent a truck full of new clothes and food packets. This will continue for a week or until there is some respite in the state,” said P.K. Nambiar from Kerala Samajam, Vasai.

“Across the MMR region, 99 per cent of the Onam celebrations have been cancelled. We have sent water, perishable food and dried food in packets through a ship and would continue it till needed,” said Kumaran Nair from Loka Kerala Sabha.