Till Saturday afternoon, as many as 2,507 people were evacuated to safe places. 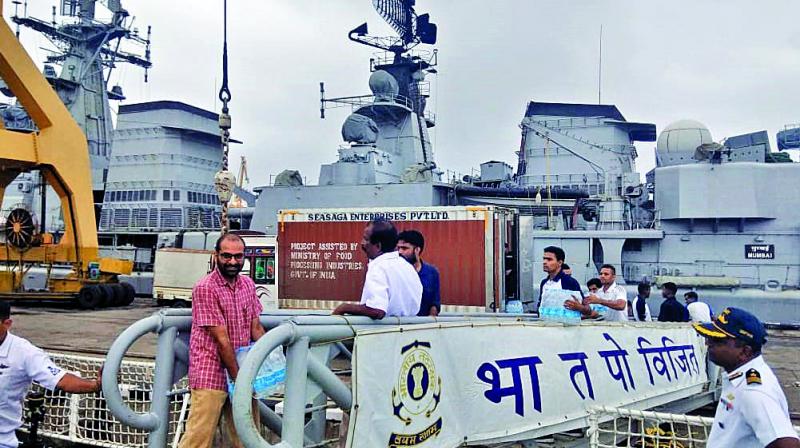 Coast Guard has been in action since August 9.

Mumbai: A ship loaded with 40 tonnes of relief material, offered by the state government and the community groups in the city, sailed from Mumbai to the distressed state of Kerala on Saturday.

The Coast Guard transported 100 tonnes of relief material — including food, water, medicines, clothes and other necessities — from Mumbai and Mangalore.

The Coast Guard has currently deployed four offshore patrol vessels, five aircrafts and 31 disaster relief teams with Gemini boats and rafts, into action. The officials stated that till Saturday afternoon, as many as 2,507 people were evacuated to safe places and over 6,415 were provided with assistance by the Coast Guards.

The officials said that most of the relief material has been sponsored by the state governments of Maharashtra, Karnataka and various NGOs. In coordination with National Disaster Management Authority (NDMA), SDMA and other state authorities the Coast Guard teams are assisting people in flood-affected areas.

“Almost 1,000 Indian Coast Guard personnel are working day and night to provide disaster relief efforts. Coast Guard has been in action since August 9 in addition to dealing with five search and rescue (SAR) operations at sea. During SAR operation at sea 31 lives were saved off Kerala and Karnataka coast,” stated a release issued by the Coast Guards.

The Coast Guard’s headquarters at Kerala is working in tandem with state administration and NDMA to provide necessary assistance to the people.

The Navy’s ‘Operation Madad’ was further scaled up to meet the increasing requests for rescue from more and more parts of Kerala. Further, the Eastern and Western Naval commands with more rescue teams have been sent along with Gemini boats, divers and other resources. As of 4.30 pm on Saturday, which was the tenth day of Operation Madad, as many as 72 diving teams were deployed at multiple locations.

Eight newly inducted teams were sent out to various locations since early morning, to augment those already in place. At least 42 teams with one Gemini boat each are deployed in Ernakulam district at various places. One team is at Pizhala island, one at Edapally, three at Perumbavur, 16 at North Paravur, 14 at Aluva, four at Muvattupuzha and two at Kadangallur.