BMC slammed for failing to repair potholes in time

The BMC top officials had agreed to accept forms in written format, where online system was not working. 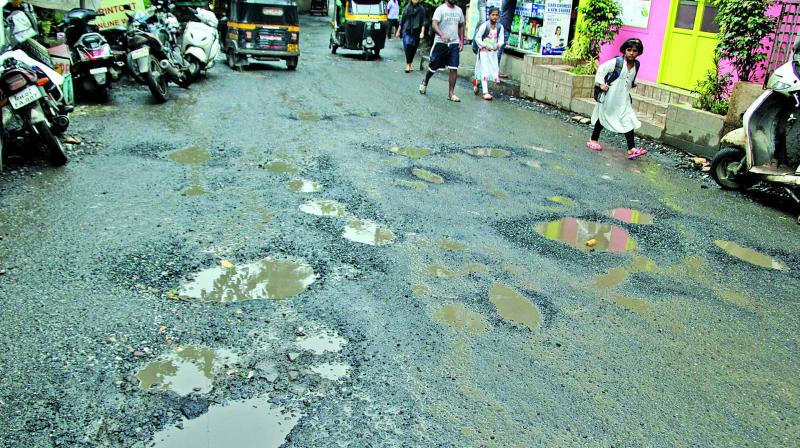 Mumbai: With the deadline of August 15 for filling the potholes already expired, Ganesh Mandals in the city have accused the Brihanmumbai Municipal Corporation (BMC) of failing to restore the roads. Majority of roads are still pockmarked raising question over the safe arrival of Ganpati idols.

The Brihanmumbai Sarvajanik Ganeshotsav Samanvay Samiti (BSGSS) — an umbrella organisation of city Ganesh Mandals, had urged the BMC to fill up the potholes on roads before August 15, so that Ganpati idols can be safely brought to the Mandals well before Ganeshotsav begins. This year, the 11-day festival begins on September 13.

Narendra Dahibavkar, the BSGSS president, said, “We reviewed the condition of city roads on Friday and found to our dismay that majority of roads are still filled with potholes. We had asked the BMC to fill potholes on Ganpati arrival and immersion routes before August 15, so that Mandals can bring idols and install them in the pandals before the festival begins. But going by the BMC’s speed of pothole filling works, it looks very difficult.”

According to BSGSS officials, roads in suburbs like Kurla, Ghatkopar, Andheri, Jogeshwari, Malad, Goregaon are riddled with many potholes.  The Mandals have also expressed ire over BMC’s online registration system, which has been started this year to provide permissions for the festival.

“The BMC top officials had agreed to accept forms in written format, where online system was not working. Despite this, ward level officers are not accepting it. As Ganesh Mandals are constantly raising their voice against potholes, they have been deliberately kept busy in online permission system,” said Mr Dahibavkar. When asked, Vinod Chitore, chief engineer (roads) said, “Work on bad patches seen during last two days of rain is in progress. If Ganesh mandals give any specific location about potholes, we will attend it immediately.”