Meanwhile, AIMIM MLA Imtiyaz Jaleel clarified that Mr Matin acted on his own and it was not the party stand. “Matin acted wrongly. 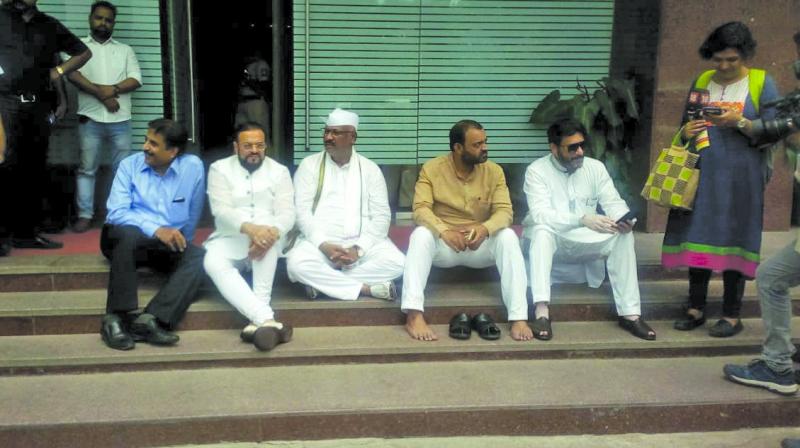 The police recorded Mr Matin’s statement on Friday night as well as the names of the BJP leaders who assaulted him.

Mumbai: The Aurangabad police on Saturday arrested All India Majlis-e-Ittehad-ul Muslimeen (AIMIM) corporator Syed Matin, who had opposed a resolution in the municipal corporation to pay tributes to former Prime Minister Atal Bihari Vajpayee at a general body meeting on Friday.

The police also registered an offence against the three Bharatiya Janata Party (BJP) corporators and two workers who assaulted him in the civic body house with shoes and slippers and damaged vehicles.

A general body meeting of the Aurangabad civic body had been called to discuss about the pipeline project, when mayor Nandkumar Ghodele moved the condolence resolution, which Mr Matin opposed.  Angry BJP corporators assaulted him in the house until he was rescued by the security guards.

The City Chowk police station registered an offence against Matin for creating communal tension and making derogatory statements, based on the complaint of deputy mayor Vijay Autade. The police recorded Mr Matin’s statement on Friday night as well as the names of the BJP leaders who assaulted him.

The police arrested Mr Matin and registered an offence against the corporators Pramod Rathod, Raj Wankhede, Vijay Avatade and two BJP workers who assaulted the AIMIM corporators. They have been charged with rioting, causing injuries to Mr Matin among other charges. The police are investigating the matter and have registered an offence against two others after verifying CCTV footage about who damaged the vehicles outside the civic house.

Meanwhile, AIMIM MLA Imtiyaz Jaleel clarified that Mr Matin acted on his own and it was not the party stand. “Matin acted wrongly. We will send the report to party president Asaduddin Owaisi on Sunday and he will take action.”