Veteran leader Ramesh Jarkiholi, his political mentor, had urged him to join the growing ranks of Congress rebels. 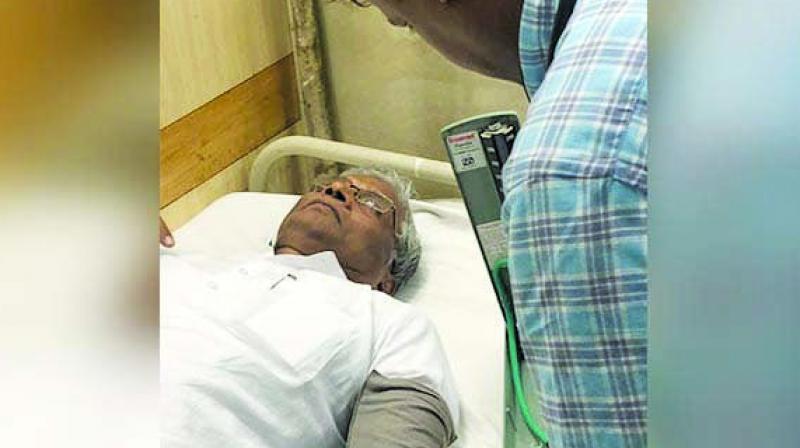 Shrimant Patil in the hospital.

Mumbai: A Karnataka MLA, who mysteriously disappeared from the hotel where Congress legislators were camping in Bengaluru on Wednesday night, surfaced in Mumbai on Thursday. On reaching Mumbai, the MLA reportedly developed chest pain and was rushed to a private Hospital where he underwent an ECG test. He was later admitted to the state-run St George Hospital.

It has now come to light that Shrimant Patil, who represents Kagwad in the Karntaka Assembly, had already planned to skip the Assembly  proceedings on Thursday. However, on reaching Mumbai, the legislator is said to have developed chest pain.

Speaking to The Asian Age, Dr Ajay Chandanwale, dean, J.J. Hospital said, “Mr Patil has been admitted to St George. The patient is stable now. The cardiologist has also seen him. Mr Patil has been advised to once again undergo an ECG tomorrow morning.”

“We found some minor changes in the ECG test and that is all. He has been referred to St George Hospital, Mumbai for further treatment,” added the doctor from the private hospital. However, his condition is stated to be out of danger, hospital sources said.

According to the sources, Mr. Patil, a sugar baron from Belagavi district, had been in touch with a group of Congress rebel MLAs who are staying in a Mumbai hotel for the past few days. Initially, he was reluctant to join the group but later decided to stay away from the crucial session on Thursday.

Veteran leader Ramesh Jarkiholi, his political mentor, had urged him to join the growing ranks of Congress rebels. According to sources, Mr Patil was willing to join his mentor but was not ready to take any step that could affect his political prospects in his constituency.

Moreover, several Bharatiya Janata Party (BJP) leaders in Maharashtra also were in touch with Mr Patil, who runs three sugar factories in the Maharashtra, for the last few weeks.